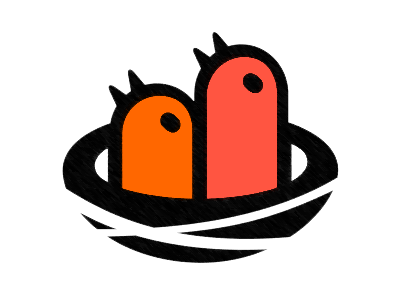 In this tutorial we’ll look at nested components in Angular and how to use them. Why nest components? It helps to organize the layout of the user interface in addition to allowing specific functionality to be packaged up and re used in other components. This means that a nested component is going to need a way to communicate with its parent or containing component. Components can nest several times if you like. You can almost think of multiple boxes with the largest box on the outside, and small boxes contained inside. Since each component is fully encapsulated, Angular makes use of Inputs and Outputs to create communication paths outside of its own boundaries.

Create A Component To Nest

To begin, let’s create a shared directory in the Angular app folder. 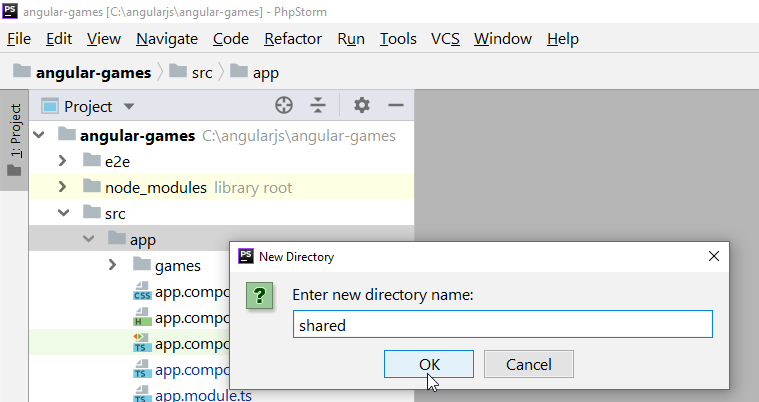 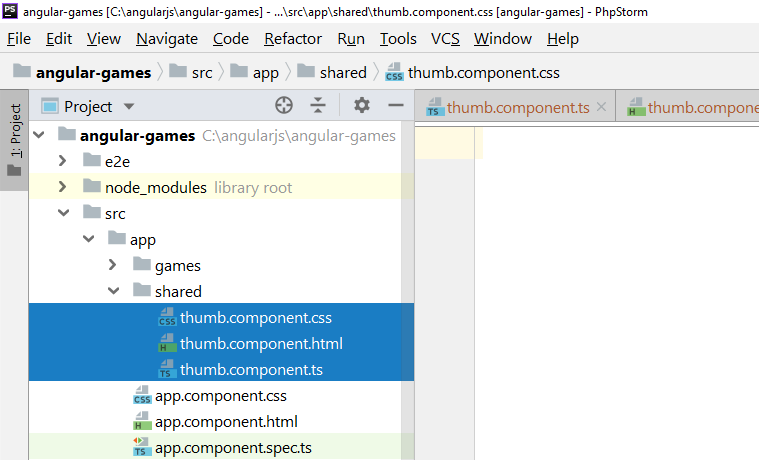 Generally, a nested component should make use of a template which manages a small part of a larger interface. The component should have a selector defined, so that it can be nested in a containing component. In addition, it will usually have a means to communicate with its parent using @Input() and @Output decorators. For our purpose, we will create a component which displays thumbs and can be nested in the game-list.component.html template. Our structure looks a bit like this. 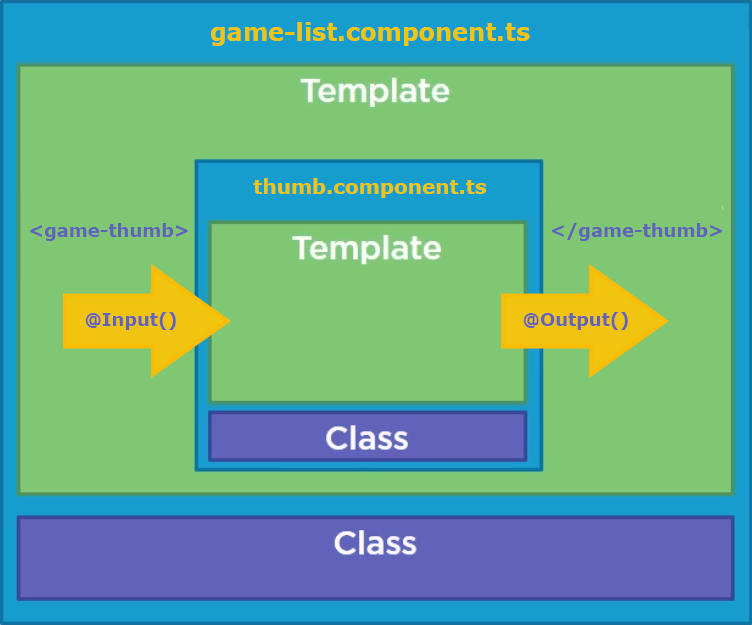 Within the template for the thumb component, we can start with the following markup. It makes use of font awesome to show thumbs up symbols. In order for the component to display various numbers of thumbs, the parent needs to provide the rating number to the thumb component as an @Input(). Also, we’ll add the ability to raise events in the nested component using @Output() and event emitter.

The component will display 5 thumbs, but we can crop the component to display less than 5 thumbs based on the rating a game has. So we can see a couple of property bindings there, so now let’s define the thumb component and its bindings in the associated Typescript file.

The rating property is a number provided by the data in the games array. The thumbWidth is calculated based on the value of the rating. The way this happens is using the ngOnChanges() lifecycle hook.

This CSS styling in the component style sheet will give us the cropping effect we are looking for.

In order to use the nested component, we first need to add it to the declarations of a module.

Now we can dive into the parent component template and add the nested component using it’s selector. Since we have all the plumbing in place, look at how the IDE actually picks up on the new game-thumb component in an intellisense like way.

Note the highlighted line to show where the nested component is referenced.

At this point, the nested component seems to be working. It is not fully functional, as it simply displays 5 thumbs no matter what rating the game has. The reason for this is because ngOnChanges() is not firing since it only watches for changes on Input properties. We have not configured that yet, but will do so next. 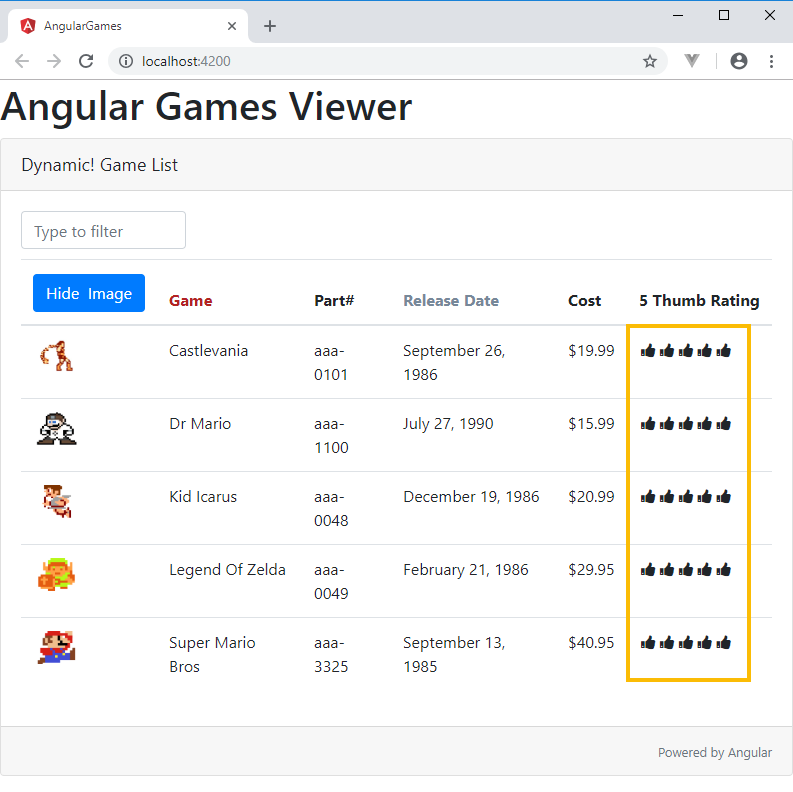 Parent To Child Communication With @Input

Now in the template of the parent component, Property Binding is used to pass data to the nested component. Note the use of square brackets in the highlighted code. The binding source is set to the data that the parent wants to send to the child. So this template is passing the game.thumbRating value to the thumb component.

Now the thumbs are dynamic! This is because the thumb component is receiving the correct value for the number of thumbs to display based on the rating. 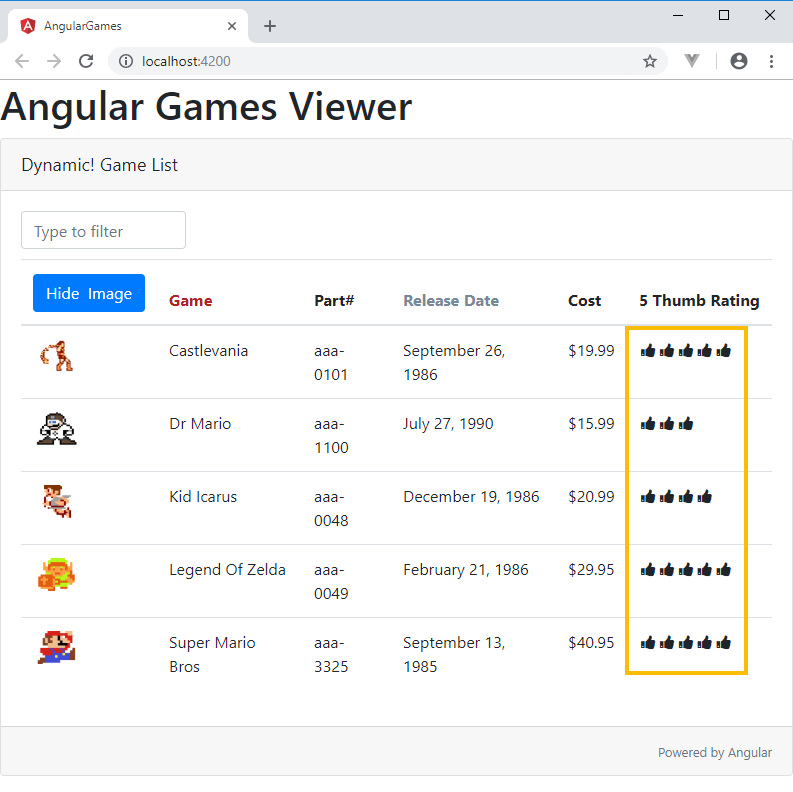 Communicating From Child To Parent With @Output

In the clip above, we now have communication happening from the parent to the child component. Now we want the ability to go in reverse. For example if something is clicked in the child, we can pass that event up to the parent. This is done by raising an event in combination with the @Output() Decorator and the EventEmitter. In fact, the only way a nested component can pass data to it’s parent is with an Event. The data to pass is the Event Payload.

First off, we can specify that when the thumb component is clicked, the onClick() method will run.

Then in the component, we have to define the onClick() method. In addition we set up the ratingClicked as an Event Property by using the @Output() decorator. This property emits an event using the EventEmitter.

Here is the onRatingClicked() method which simply sets the page title to something new based on the payload of the event.