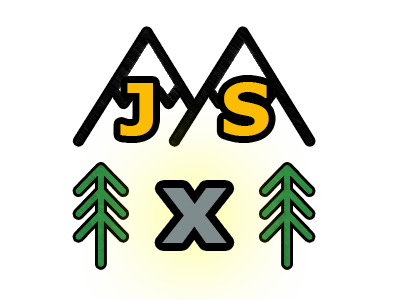 JSX is an extension to the JavaScript language, and therefore it can accept any valid JavaScript expressions placed inside the curly braces. For example, 4 + 4, user.firstName, or formatName(user) are all valid JavaScript expressions. This allows you to make your JSX more dynamic. In this tutorial we’ll take a look at some additional examples of embedding expressions in JSX markup, as well as some of the rules associated with rendering more than one html tag in a JSX expression. We’ll see that one parent element is needed, and learn of a couple of ways to make sure we meet that requirement.

Starting With A Fresh App

Thanks to the Create React App, its super easy to whip up a fresh new application and that is exactly what we’ll do now. We’ll name it cartable, as we want to approximate how a shopping cart works in React.

Now, we’re going to add Bootstrap to make the user interface look nicer. So first off, at the terminal we’ll simply install the latest version of Bootstrap like so.

In order to make use of Bootstrap, we’ll now need to import it in the index.js file like we see here.
index.js

We’re going to be adding more than one component in this project, so it makes sense to create a folder to hold the components we’ll need. Here, we can create a new folder in the src folder named components. 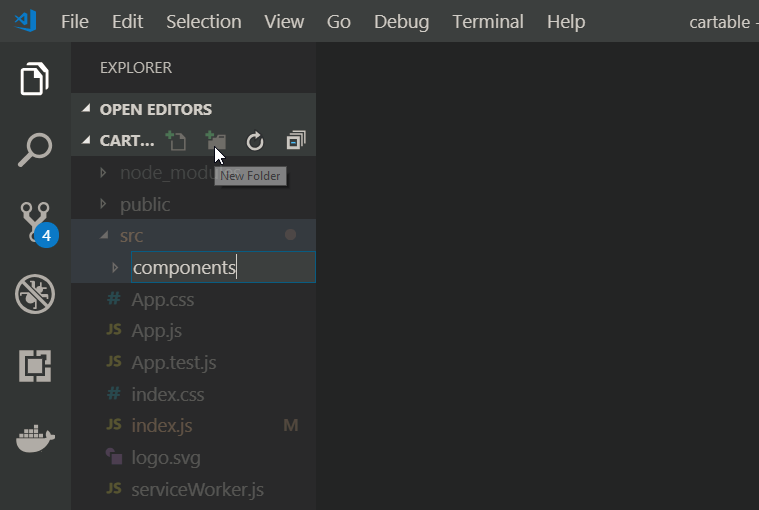 In that components folder, let’s add a new file that will represent an item in the shopping cart. This is the item.jsx file.
item.jsx 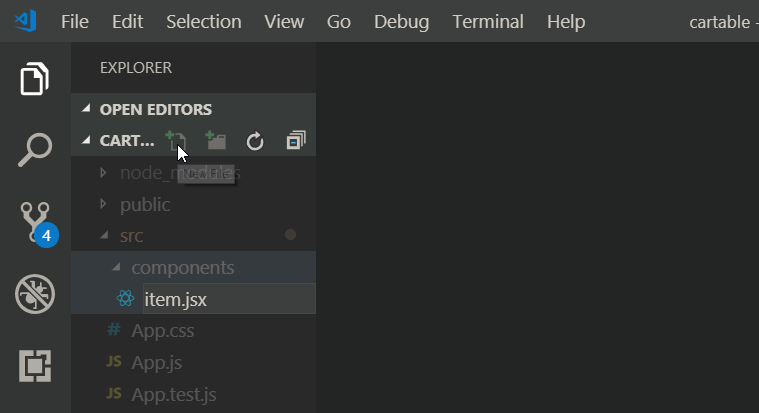 Now just add some simple JSX markup to that file. It is a single h1 tag with the text Cartable!

Let’s add that component to the index.js file so that it can render on the page. Notice that we are removing the default <App /> rendering and replacing it with <Item />.
index.js

In the index.html file, we can add a class to the body element since we have installed Bootstrap. This will space things out nicely on the page.

Containers are the most basic layout element in Bootstrap and are required when using our default grid system. Choose from a responsive, fixed-width container (meaning its max-width changes at each break point) or fluid-width (meaning it’s 100% wide all the time).

There we go, we’re on our way!

You can have more than one tag as part of a JSX expression. So far, we’ve only seen a h1 tag, but what if we want to have both a h1 and a button in the same JSX expression. In order for this to work properly, we need an outer wrapping div. JSX Expressions must have one parent element. In addition, it is best practice to wrap the entire JSX expression in parenthesis ( );.
item.jsx

You might not want to pollute your html markup with excessive div elements. In the example above, we needed to wrap both the h1 and button tags with one single parent element. This is a rule of JSX. The downside however, is that you will notice if we inspect the markup on the page that there is an extra div element now.

We can fix this extra div issue by using the <React.Fragment> tag in place of the <div> element.

Adding State To The Component

Now instead of having static content in the JSX expression, we can use some data from the state object to display a value. In this snippet below, we add that state object with a property of count. It’s value is 0. To reference that count in the JSX markup, we use this.state.count.

The output is displaying the value we had set to the count property.

If we change the value of the count property, then the UI updates automatically.

When the value is above 0, we see that result instead.

Working with JSX takes a little time to get used to, but as you play around with the syntax it quickly becomes familiar. In addition, using a code formatter like the Prettier extension will automatically format and clean up your JSX so that makes it easy to produce good-looking markup with minimal effort.