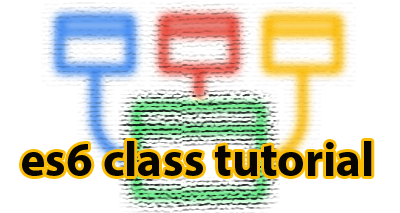 Object Oriented Programmers Rejoice! ES6 now has support for classes! This ES6 Tutorial will look at how JavaScript now has a class keyword as of ES6, and you can make use of it to program in a similar way as to how you might in C#, Java, or PHP. Classes in ES6 are definitely a step in the right direction to achieving true object oriented programming, but truth be told, these are not classes in the purest sense of the word. It’s more realistic to look at a class in ES6 as a new syntax to work with Prototypes and Constructor Functions that we know in ES5. Even still, the new syntax is much more terse, concise, and easier to understand. For these reasons, it is a very welcome addition to the language. Let’s get right to work learning all about classes in ES6!

Creating a class is super easy. All you do is use the class keyword followed by a name for the class, and then your opening and closing curly braces. Pretty simple stuff. After we create our class here, we actually log out the typeof Vehicle of our class. Wait a minute, it says it’s a function. Why isn’t it a class? Well, this shows that in fact using the class keyword does not really give you access to an actual class type in JavaScript. You can almost think of it as an ES5 constructor function with much prettier syntax.

Instantiating an Object from an ES6 Class

Now that we have a class, we can now instantiate an object. We do this by making use of the new keyword like many other object oriented programming languages. This is how we, “new up” an object.

So even though the “class” itself is a function, when we instantiate an object from that class, we do get an actual object. In addition to this, if we test that the vehicle is an instance of Vehicle, we do get back a true statement. This shows us that we can determine the class of an instantiated object by making use of the instanceof keyword.

Creating an ES6 Method Inside a Class

So far our class is 100% empty. Let’s change that by adding a method to our class.

Adding a method to an ES6 class is great, because just like you can use a shorthand to declare a function inside an object literal without the function keyword in ES6, you can also use this shorthand syntax when creating a method inside a class. It’s a very nice and clean syntax. In addition, if your editor supports it, you will also see a nice autocomplete feature for your methods once they are declared. 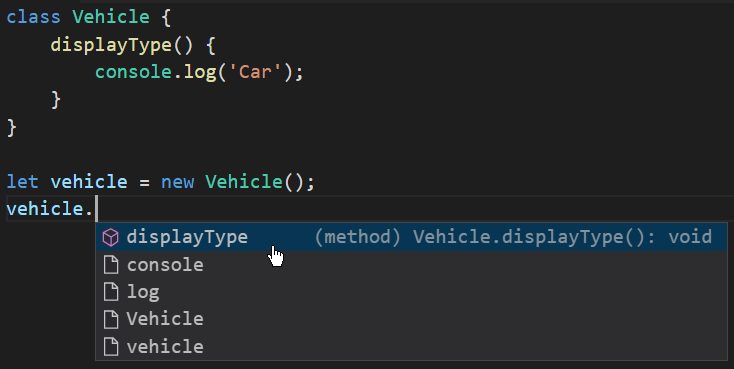 Adding a method to a class is like adding a function to the prototype object. This just further shows that setting up a constructor function in ES5 and adding functions to the prototype is still happening behind the scenes in ES6. The class keyword just makes things much easier for us. Observe this example code to see this idea in action.

When we inspect the console, we see Running Automatically. notice all we did was new up an object. We never actually call the constructor itself since it is automatic. Note there is no comma after the closing curly brace of the constructor. Since we are used to working with object literals where every key value pair is separated by a comma, you might be tempted to add one between methods in a class. Don’t do it! You’ll throw an unexpected token error if you do.

Assigning a class to a variable

You may be familiar with assigning functions to variables and passing them around as first class citizens. You can do the same type of thing with a class in ES6. Let’s see how that works.

Inheritance with extends and super in ES6

Let’s now create a class that inherits from another class. To do this, we make use of the extends keyword just like other object oriented languages. This allows the child class to inherit all of the behavior of the parent class. We can extend our Vehicle class by building a Tesla class to test out the functionality of extends.

Notice that the Tesla class is 100% empty, there is nothing between the curly braces. When we run the code however, we get the message from the constructor of the parent class of Vehicle. So even though Tesla has no constructor or methods in it, it does extend Vehicle which does have a constructor. In ES6 when working with classes, that constructor does get called when the child class is instantiated. Let’s see another example of this, but this time we will pass in an argument to the constructor in the parent class.

Calling a Parent Constructor with super()

When you extend a class, all methods and properties get passed down to the child instance. What about a situation where you want to apply different behavior to a method that gets inherited? This is pretty easy. All you need to do is redefine the method in the child class with the behavior you would like. Here is an example.

Even though the prototype gets overridden here, you do not need to specify any special type of syntax to do so. Just re create the method in question in the child class, and it will just work.

Calling super() in a method

By calling super.getPropulsion(), the JavaScript engine will look up the prototype chaine for a getPropulsion() method, and locates it in the Vehicle class (or constructor function). We can achieve a similar result using Object Literals in combination with the Object.setPrototypeOf() method. The example would translate to this code you see here.

So far we have covered a good deal of information about using the class keyword in ES6, but we haven’t yet touched on using properties. Let’s investigate them now. We’ll set up some example code then discuss how it works.

Here we have a class of Vehicle, and in the constructor we are setting this.kindof to a simple string value of ‘Car’. The constructor method in Vehicle is very much like the way you would specify a constructor function in ES5 which you would “new up”. Many times you would accept values and set them via the this keyword when working like this.

Next we have our Tesla class which extends Vehicle. All we do in this class is to define a constructor which calls super().

Finally, we new up a new instance of Tesla and assign it to car. We then log out car.kindof and find the result of ‘Car’. The takeaway is that we initialize values in the constructor using the this keyword as we did in ES5.

Accessing this across constructors

Static Methods and Properties in ES6

First we will look at an example of a static method. Notice the method declaration of getDefaultEngine() is prefixed with the static keyword. If you are familiar with the general concepts of object oriented programming, you know that if a method is static, you can call it right from the class without having to create an instance of the class first. That is exactly what we do here. We call getDefaultEngine() right from the Vehicle class with no need of the new keyword. By declaring a method as static, the method gets attached directly to Vehicle.

No static keyword for class properties

As it turns out, in ES6 you can apply the static keyword to methods but you can not do the same for properties. If you want to set a static property on a class in ES6, it actually works like it did in ES5. Here is an example of pseudo static property in ES6.

In ES6 during your method definitions inside of a class, you can set up getter and setter methods quite easily. All you need to do is prefix the method you want to be a getter with the keyword of get. Conversely, if you need to set up a setter method, you would prefix with the set keyword. In this example of getters and setters below, we set up a class of Square. By using the keywords of get and set, we give ourselves the ability to retrieve the height or area of a square by simply typing square.height or square.area. To set a new height for the square, we simply do something like square.height = 25;

In ES6, classes are first class citizens. In other words, they can be passed around in your scripts just like you would pass variables, objects, and functions. Let’s see how it works.

Here we have our Vehicle class as well as a function of move() defined. Note that when we make a call to move() we pass in a new instance of the Vehicle class. The output shows that the code runs and we get the output of the constructor functions of Vehicle, as well as the logic from the move() function itself. You could even use this approach in a more one off type of fashion by making use of an anonymous class like so.

We covered a lot of ground in this ES6 Class Tutorial, hopefully you enjoyed the material. First we went over how to use the new class keyword to define a class in ES6. Next, we learned how to instantiate an object from our class. We found we make use of the new keyword, similar to how we might in other languages that support classes. After this, we covered how you define a method inside your class. It is similar to how we might define a method in an object literal, and we can omit the function keyword for a shorter and easier to read syntax. Next up we covered how the class keyword is actually just a new syntax that is easier to write and comprehend to set up constructor functions and object prototypes. We saw that ES6 classes have support for constructor functions, inheritance, method overrides, getters and setters, and static methods. Finally, we covered the concept of classes acting as first class citizens in ES6 – which means they can be passed around just like any other value in your program. Thanks for reading!