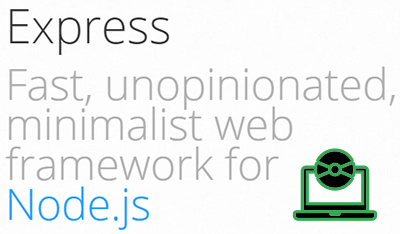 In this Express beginner tutorial, we can download and install Express.js to our system and see how to get a super basic skeleton application set up and configured. Thankfully, this is made pretty easy by the fact that there is a dedicated tool to create a new Express project automatically called Express Generator. Let’s take a look at how the complete beginner can get up and running with Express.js right away.

What is Express.js and why do we want to use it?

So at this point we have taken some time to get used to working with Node.js at a very basic level. We learned about what Node.js is, how to write and read data from the file system, handled some requests and responses, as well as set up our own basic routing system. If you take a look at the code in the routes tutorial, you’ll notice that it is kind of a lot of work to just set up some routes on our own. In addition, if we wanted to add multiple routes, it would not scale that well. Working with Node.js in it’s pure form requires that we write everything all on our own. This is prone to errors, is likely insecure, and just plain lots of work. Well guess what? Like most other things in software development, what you are trying to do has likely been done already with a stable and tested solution. This is why we are now moving on to taking a look at Express.js. Express will allow you to focus on your business logic and the needs of your application. The repetitive tasks like parsing urls and setting up manual routing can be handled by the framework. Express builds on Node and offers many tools that make working with Node easier. With Express, configuring routes becomes a breeze. The Express framework, created by TJ Holowaychuk, provides convenience methods and syntactic sugar for many common tasks that would otherwise be tedious and redundant.

How to setup and configure Express.js

The first thing we need to do is to install the express generator module on our system. It is super simple to do. Just type npm install -g express-generator at your command line, and this will install it for you.

Next up, let’s go ahead and create a new Express project using our newly installed Express Generator. All you have to do is type express and then the name of the project that you want to create. We will create a project named expressjs-tutorial. You’ll see that as the generator does it’s work, it gives you some output to show you the exact files and folders that it creates for your project.

For this example, we now make use of Visual Studio Code and choose the ‘Open Folder’ option to open up the folder which was just created.

As part of the project creation, Express Generator fills out a package.json file which provides a list of the dependencies needed to create a skeleton application in Express.
package.json

These dependencies are not yet installed, so you need to change into the directory which holds the package.json and run npm install to complete the process.

Once this step is complete, you will now have a node_modules folder which actually holds all of those dependencies which were just downloaded to your machine using npm. 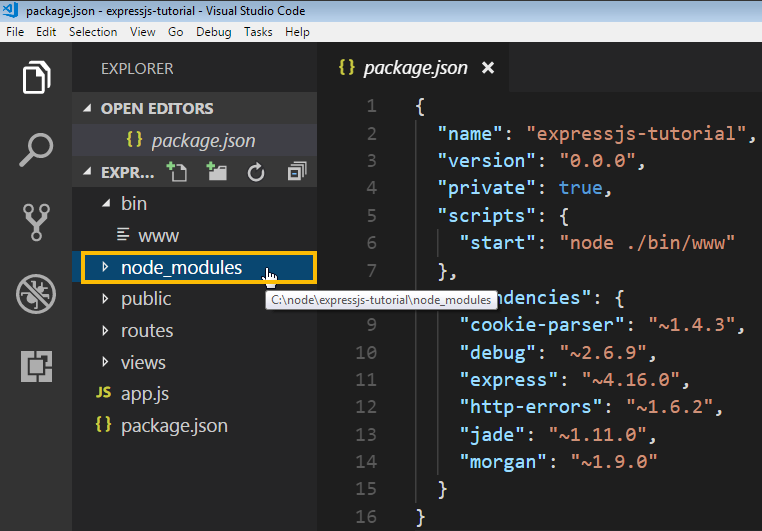 You are ready to start the Express application. To do so, simply type npm start in the root of the project.

Now, go ahead and open up your browser at http://localhost:3000/ and check it out!

The bin/www and app.js files

These two files are pretty important in an Express application, so let’s take a quick look at what they are doing for us.

Here are a few quick takeaways of the bin/www server file in Express.

var http = require(‘http’); Loads the http module that we learned about in the html rendering tutorial.

app.set(‘port’, port); Sets the port the application should use to listen on.

var server = http.createServer(app); The server is created like we saw in our Node routes tutorial.

The app.js file creates an express application object which is named app by convention, and sets up the application with various settings and middleware. It then exports the app from the module. Here is the code in the app.js file.

Some key points about the app.js file.
var createError = require(‘http-errors’);
var express = require(‘express’);
var path = require(‘path’);
var cookieParser = require(‘cookie-parser’);
var logger = require(‘morgan’);
At the top of the file, there are several imports that Express needs to do it’s work.

app.set(‘views’, path.join(__dirname, ‘views’));
app.set(‘view engine’, ‘jade’); Here is where you can configure the templating engine used. By default it uses Jade.

app.use(express.static(path.join(__dirname, ‘public’))); How to set the public folder in Express.

We can see that in the app.js file, if a user requests the / route then the indexRouter is used by this code app.use('/', indexRouter);. Now indexRouter actually holds what is contained in index.js. This is specified by var indexRouter = require('./routes/index'); Let’s look at that file.

Here is where the action starts happening. At the top of the file, the express router is required and initialized into the router variable. After that we can see that a get() function is called. That function accepts two arguments.

The first argument is the path of the route. In this case of course, it is simply / or the home page.

The second argument is a function which itself takes three arguments. This function takes the request, the response, and the next arguments.

Inside this function, a call to render() is made. We can see that ‘index’ is the first argument. What this is saying is to look in the views folder for a file that has the name of index before the extension. In the views folder there is an index.jade file. This is the file being referenced. The second argument to the render() function is a JavaScript object. It is in this object where variable data can be passed to the view as it is being rendered. In fact, let’s make a quick change to this file.

Once the server is restarted, you can see that by updating the title property of the JavaScript object, our data is updated in the web browser.

The key concept is that we are rendering a template file, and passing in dynamic data to that file so that it can be used in the view. This concept is the same across many different frameworks and many different programming languages for that matter.

Now we can look at the users.js file.

Notice anything? The users.js file is using the same / path. How can this be? This is because in app.js, it was already defined that /users would use users.js. Therefore inside users.js, we do not have to specify the full /users path. In fact if we did, that would equate to /users/users and that is not what we want. The key is that the path seen in the actual routes file is relative to the path specified in app.js. To see how this works, we can add another route to users.js.

What this does is set up a new route that can be visited at http://localhost:3000/users/stats

We now see how routing works on a fresh install of Express.js. Maybe you would rather have a single point of entry so to speak, and just put all of your routes in one file. You can do this as well if you like. Let’s see how.

Finally, you can consolidate all of your routes in that index.js file like so.

Notice however that we need to specify the full path when putting all of the routes in the same file versus putting each route into its own file. Both approaches work, it all depends on what makes the most sense to you and your needs. We now see how a basic skeleton express application is set up and how it works.

You have now created a skeleton website project using the Express Generator and confirmed that it runs using node. By looking at the files and folders that are created for us, you also understand how an Express application is structured. Here are some key topics about Express and Node to keep in mind.

To learn more about how the basic Express structure works, check out the mozilla express tutorial.