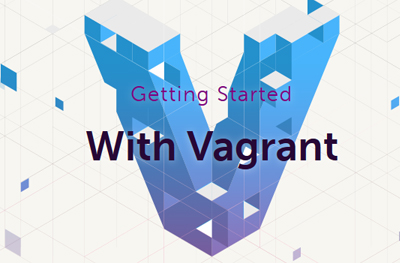 With Vagrant now installed, let’s have a look at getting started with Vagrant. In this article, we’ll have a look at several topics. First off, we’ll explore the concept of Synced Folders and how Vagrant sets up file sharing between the host and guest OS. Then we’ll move on to working with a few different commands in Vagrant. We will look at vagrant suspend, vagrant resume, vagrant status, vagrant halt, vagrant up, and a few others. Next up will be destroying virtual machines with Vagrant, and why you don’t need to get too excited about VM destruction. The Vagrantfile makes it easy to build another one if you like. Finally, we’ll talk about where to find help with getting started with Vagrant. Let’s check it out.

A great feature of creating virtual machines with Vagrant is that of automatic file sharing between host and guest operating systems. This is better known as synced folders. The host operating system is the OS of the host machine. This is what the type 2 hypervisor runs on top of. These demonstrations are making use of VirtualBox, however many other providers are available with VMware being a popular choice. Operating systems that run in the hypervisor are referred to as Guests. Let’s check out a quick demonstration to prove that file sharing is already enabled.

To begin, we will create a new file on our host operating system named my_shared_file via the simple touch command.  A quick ls shows that the file is now created.

With the file now created on the host OS, we can use nano my_shared_file to add some text to the file.  Like the file says, we will be able to access this file on the guest OS too as Vagrant sets up synced folders right away.  By default, the folder which contains the Vagrantfile on the host will be shared with the /vagrant folder on the guest.

From our host, we will now SSH into the guest via vagrant ssh.  Once logged into our guest OS, we change to the /vagrant directory via cd /vagrant, and then list it’s contents with ls.  We see the file is there automatically!  To prove it is the same file, we can view it’s contents with the cat command and the text is in fact the same that we created on the host. 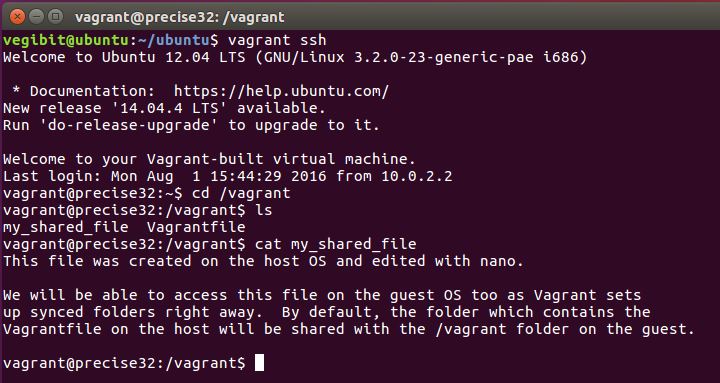 The great thing about shared files, or synced folders, is that it makes it easy to work on the guest with the editors and tools of your choice. All testing happens on the guest, which is a closer replication of a production environment.

With Vagrant, you can create multiple environments to test out various configurations of components. If you’d like to switch between projects and retain the state of the current VM, you can make use of the vagrant suspend command to do so. First, we can be sure that our virtual machine guest is running both from Vagrant and VirtualBox. We’ll use vagrant status and vboxmanage list runningvms to see this.

When we are ready to bring this VM back online, we can make use of vagrant resume like so.

The key takeaway when using vagrant suspend and vagrant resume, is that this approach saves the state of the virtual machine.

Vagrant Halt and Vagrant Up

In order to bring a halted VM back online, you would need to make use of vagrant up.

The takeaway with vagrant halt and vagrant up is that this approach conserves resources on the host, but the guest will take longer to boot after a halt. So now we know the difference between using each approach.

In order to recover all resources and disk space on the host, we can destroy a VM instead of just suspending or halting it. It might feel like you’re losing a precious development environment by doing this, but really you’re not losing anything. When using vagrant, all you need is that valid Vagrantfile, and you will be able to recreate the environment again. In fact, you can just as well put the Vagrantfile right into version control and other developers can recreate the same exact environment very quickly on the machine they have Vagrant installed on. This is the power Vagrant offers. Before we destroy our VM, let’s once again confirm it is running.

After destroying the VM, we can see that there are in fact no running virtual machines when we check the status from both Vagrant and VirtualBox. Now, consider that this virtual machine is entirely deleted and gone. What we still have, however, is the Vagrantfile. It is still in that Ubuntu directory we had created on the host machine. With that file, it only takes us a few minutes to spin up a whole new virtual machine. Let’s see.

We can view the updated status.

Check that out! We have an entirely brand new virtual machine running now. Notice the unique identifier on this new VM, it is “ubuntu_default_1470073198181_65287” {580d88af-93b4-4c90-81b8-3fa1bff04b84}. This is completely different than the original VM we were working on which was “ubuntu_default_1469830649698_22953” {4c253c3e-de65-4285-82b5-3a2a84d9f69d}. So the takeaway from this is that vagrant suspend and vagrant halt are ways of stopping the VM, which can then be resumed. If you run a vagrant destroy however, you are entirely wiping out the VM and associated files with that VM. This is like manually deleting a virtual machine in the VMware or VirtualBox GUI. With our Vagrantfile however, it is quick and painless to spin up a new virtual machine right away.  During your time working with Vagrant, you will find which approach works best for you with regard to stopping, resuming, destroying, and creating virtual machines.

Getting Help With Vagrant

There are a few ways to get more help with Vagrant when you’re starting out. Check out these great resources.

There are almost too many benefits to list for using Vagrant, but we will try.

Getting Started With Vagrant Summary

This was a nice introduction to getting started with Vagrant, the fantastic DevOps software that makes configuring virtual environments easy. We had a look at the basics of getting up and running with Vagrant along with some good resources for learning more about this great tool.

← Setting Up Vagrant On Ubuntu | How To Provision NGINX Using Vagrant →