How To Use A Dockerfile 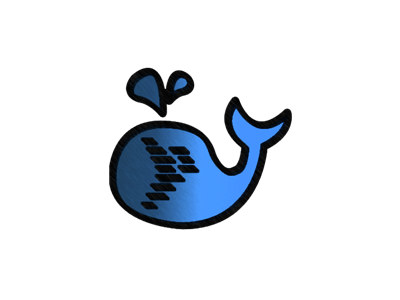 In the earlier Docker articles, we were able to build images and get them running as containers manually. In this tutorial, we will explore how to take this a step further by building images with code. This is where the Dockerfile comes into play. Dockerfiles are small programs that describe how to assemble a Docker image. You can run these small programs using the docker build command. Once the docker build command finishes running the Dockerfile, a new Docker image will be placed into the local Docker Registry on your computer. Once you have a suitable image, you can run it with the docker container run command.

What Is A Dockerfile?

A Dockerfile is a recipe for creating your image with a default name of Dockerfile with a capital D. If you want to name your Dockerfil something else, you can do that with the -f option. Each statement in the Dockerfile is its own layer and the order of them matters since the file runs top-down.

Each Step Produces An Image

Each step of the build process produces a new image. The build sequence is a series of steps where it starts with one image, makes a container out of it, run something in it, make a new image. The image in the prior step is unchanged. Each next step is saying, start from the prior step, make some new changes, then save to a new image. Dockerfiles are not shell scripts though they do look like shell scripts, because that helps them be familiar to people, and it makes them a little easier to learn. Processes you start on one line will not be running on the next line. You run them, they run for the duration of that container, then that container gets shut down, saved into an image, and begin anew on the next line. We’ll run through several examples to see how this works.

A Basic Dockerfile In Action

To get started with a Dockerfile, we can begin with only three commands to keep things simple. You will find these commands in virtually all Dockerfiles you encounter.

First, create a file named Dockerfile with no extension at all in the directory of your choosing.

Now, we can populate that file with the following commands.

Now comes the fun part. We want to run the Dockerfile we just created. Recall that this can be done with the docker build command which is a part of the builder management collection of the commands. The -t we include is simply tagging the image with a name so we have something to reference it by, otherwise, the resulting image would have only a cryptic id and no easily readable name. The other point to note is that there is a dot at the end of the command. That just says, use the Dockerfile in this directory we are in.

The image is built successfully and shows up in both Visual Studio Code and the Docker Dashboard. 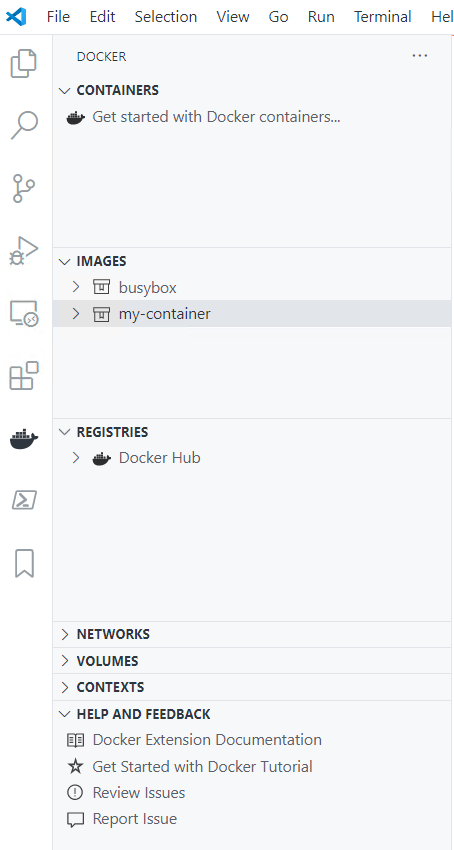 This step simply downloads and creates an image from busybox, which is very small and has nothing but a shell in it. Then the build process moves to step 2 of 3.

During step two it starts from that image, creates a container, and runs the command provided. From that running container, the echo of “building simple docker image” is run. During this step the 8b4d5802aed5 image is created. There is an intermediate of 1ec98c10d7d4 which was used to run our build step. Docker is smart enough to know that this intermediate container is not going to be used anywhere else in the Dockerfile, so it cleans up the intermediate container. This brings us to step 3 of 3.

During the final step, Docker sets the CMD to be run when this container starts. It is updating the state of the image. This step resulted in another intermediate container 7c4e7b0aa45b which is used temporarily in order to commit to the final image. Like the prior step, once it is no longer needed, it is removed. So the final result is the 2cd663381747 image. This is it’s image id. Since we tagged (read – named) the image as part of the build process, we can see that my-container is referring to the 2cd663381747 image.

The section above showed how to build the most basic of images in Docker by using a Dockerfile. The build went successfully, and we now see the image in our local registry. Well, images were made for running, so let’s go ahead and spin up a container from our newly built image!

Now let’s build another image, but make it a little more interesting. We’re going to build and run an Nginx Container while also adding our own custom HTML and CSS into the container during build time. That way we can see our own HTML page rather than the default Nginx splash page. In the practice directory add these two files.

The Dockerfile here uses nginx:latest in the FROM command. We’re not building our own Nginx, since an official image exists already that is battle-tested and works. Using official images in your Dockerfiles will make your Dockerfile easier to maintain as time passes. You can easily add functionality on top of an existing base image, and that is what Docker is for and how it works. Now we see the WORKDIR command in action. You can almost think of WORKDIR like running “cd /the/directory/path”. In the Dockerfile however, anytime you need to set the directory path you should use WORKDIR. In this example, we are setting the working directory to the default root HTML folder in Nginx. The last command we run is the COPY command which is used to copy your own source code files into container images. In our case, we are simply taking css.css and index.html, then placing them in the ./ directory (which refers to /usr/share/nginx/html) since we have set the path using WORKDIR already. Now, you can see that this Dockerfile is missing a required command of CMD at the end. This is because the FROM image (nginx) already has a CMD in it. Using FROM means you inherit everything included in that base image. You can see this by looking at the layers on Docker hub, or with the docker history command – both shown here. 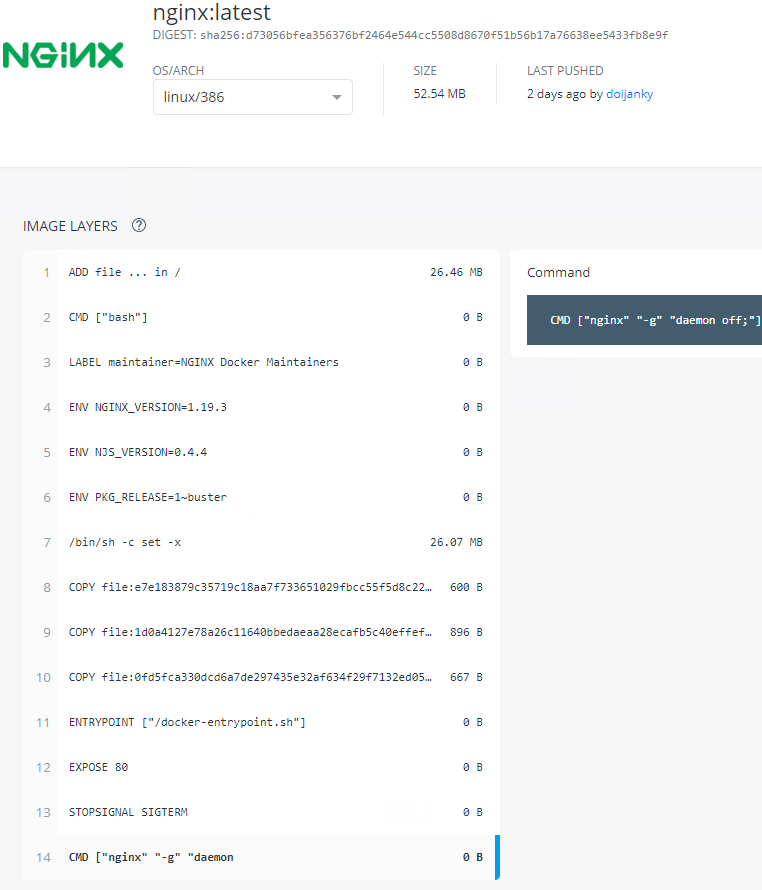 Before we build an image using this Dockerfile, let’s confirm we have no images on the system currently.

Now we can build the image and we’ll name it using -t just so we have a nice name to work with.

The build went well, and we see the new image in Docker Desktop.

At this point, we have built an image but do not have a running container. Let’s confirm.

Ok, the container is running well!

Now visit http://localhost and you can see the new custom nginx container!

In this section, let’s look at the most commonly used Dockerfile commands. The ones to pay the most attention to are FROM, ENV, RUN, EXPOSE, and CMD.

The RUN statement says to run a command through the shell. For example RUN unzip the install.zip file into this directory or RUN hello docker.

This is required and is the final command that will be run every time you launch a new container from the image. It also holds true anytime you restart a stopped container.

The Environment statement sets environment variables like ENV DB_HOST=db.production.example.com or DB_PORT is 5432.

By default, no tcp or udp ports are open inside of a container. It doesn’t expose anything from the container to a virtual network unless it is listed here. The EXPOSE command does not mean that these ports are going to be automatically opened on your host, that is what the -p command is used for with docker container run.

The ADD statement is a very useful expression that you can use to add a local file and perform other tasks. It can also add the content from an archive. So, if you say ADD project.tar.gz to /install, it doesn’t copy the file tar.gz into that directory, it notices that it’s a compressed archive and it uncompresses all the files in that archive to that directory. It also works with URLs. You can say ADD the thing that you download from this big URL to /project. That would cause project.rpm to get download and put in project/project.rmp.

Creates a mount point with the specified name and marks it as holding externally mounted volumes from native host or other containers.

ENTRYPOINT is similar to CMD, but it specifies the beginning of the expression to use when starting your container and lets you tack more on the end. So, if your container has an entry point of LS, then anything you type when you say Docker run my image name would be treated as arguments to the LS command. CMD specifies the whole command to run, and if the person, when they’re running the container, types something after Docker run image name, that will be run instead of CMD. ENTRYPOINT gets added to when people add arguments to your container and CMD gets replaced when people add arguments to your container. You can actually use both of them together. If you have them both, they get strung together, one after the other. In general, if you’re trying to make something that looks like a program and you want people to not care that it’s running inside a Docker container, ENTRYPOINT is for making your containers look like normal programs. CMD is the more commonly used approach.

The USER statement says, I would like the commands run in this container to run as the user John, or maybe that user’s identified by number, USER 5000. This can be useful if you have shared network directories involved that assume a fixed username or a fixed user number.

The USER instruction sets the user name or UID to use when running the image and for any RUN, CMD and ENTRYPOINT instructions that follow it in the Dockerfile.

The STOPSIGNAL instruction sets the system call signal that will be sent to the container to exit. This signal can be a valid unsigned number that matches a position in the kernel’s syscall table, for instance 9, or a signal name in the format SIGNAME, for instance SIGKILL.

We covered a lot of great topics in this Dockerfile tutorial. To get even more familiar with Dockerfiles and how to use them, check out the additional resources below.