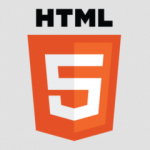 HTML is also known as HyperText Markup Language, and it is the standard language of the internet used to create web pages. The language consists of elements which are referred to as tags inside of angle brackets. For most scenarios, there is an opening tag and a closing tag. For example, when there is a section of content and you would like to place a summary or header above it, you might use an h2 tag. An example would be <h2>The Summary</h2>. Sometimes, you may have just one tag like in the case of adding an image. The img tag only has one tag, it is both the opening and closing for the element. Web Developers create files with an .HTML extension and then when visitors go to their website, the Web Browser on the user’s computer will be able in interpret the HTML tags and present to the user a nicely formatted web page. That is the key to understanding HTML. HTML is used for markup only, not logic or programming per se. The markup of the elements in the file provide for presentation and semantic meaning, but again, there is no logic involved. For that, you’ll need to use a language like PHP, Python, or Ruby. Hyper Text Markup Language does however provide a means for collecting user data by way of HTML Forms. By combining data collection with HTML and backend logic with a language like PHP, one can build very useful web applications. Follow the links here to learn all about the HTML Markup Language, and how you can make use of it to create your own websites and web pages.