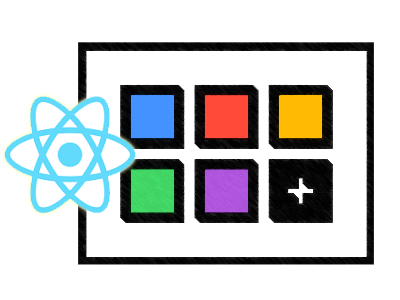 Well hello web developer world. Starting with this tutorial, we are going to start investigating React.js – a ridiculously popular open source JavaScript library. Before embarking on our React.js journey, it will help to brush up a bit on ES6 and various JavaScript concepts like variables, objects, and arrays. React.js of course uses functions and classes in JavaScript. In addition we’ll be learning about the declarative nature of using React. Declarative means that you describe what you want to happen, and the tool does the work for you. The SQL language is the most popular example of the declarative style. Let’s get started with React.js now!

Why Is React.js So Popular?

Certainly you have heard of React.js before checking out this tutorial. In fact, WordPress now leverages the React.js library in its own Gutenberg editor. React focuses on building user interfaces. The UI is of course is what end users are presented with to interact with an application, be it web-based or mobile based. React.js uses JavaScript, so it is perfect for both web and mobile user interfaces. In React.js, the developer describes the user interface. This is a key aspect of React.js that makes it popular. The designer can tell React.js what she wants, and React.js does the heavy lifting for us. React.js allows developers to build complex user interfaces without doing everything from scratch using JavaScript and native APIs. This is what it means to be declarative. In other words, we tell the tool what we want, not how to do it. Working directly with the DOM API is difficult. React.js instead uses a virtual dom that is more friendly than the real one. Having React.js skills is great for iOS and Android mobile applications as well as Desktop browsers. Additionally, React.js is fairly small so once you have the basic API down, your knowledge of JavaScript will enable you to do very productive things with the library.

In React.js, there are three basic concepts to understand. The first is components.

User interfaces in React are described using Components. Think of a component as a simple JavaScript function. Just like in other programming languages, functions are invoked with some input and hopefully we get some output returned. In React.js, this works a little differently. A React.js component is not really invoked. You simply write it out in a similar fashion as to how you would write standard html.

The second big concept with React.js is that of Reactive Updates. When the state of a React component, this can be thought of as the input to that component, changes, then the user interface it represents, the output, will change as well. Any time this changes happens the html in the dom tree needs to be regenerated. When using React.js, it will simply react to the changes in a component’s state and automatically update the parts of the DOM that need to be updated.

The third important concept we need to be aware of concerning React.js is the Virtual DOM. What is the Virtual DOM? It can be thought of as a virtual representation of views in memory. In React.js, you generate your html markup using JavaScript. When a web application receives data from the server via AJAX, you need something more than HTML to work with that data. This is where React.js uses a virtual representation of HTML views in memory, also known as the tree reconciliation algorithm. React uses the virtual DOM to compare versions of the UI in memory before it acts on them. You can learn more about the Virtual DOM here.

For The Virtual DOM:

Ok enough with the blah blah, let’s build a simple React.js component to see how this works.

The easiest way to get working with some React.js code on your local machine is to use the Create React App available by installing it using NPM. As long as you have Node installed already, you can run a few simple commands such as these.

Then visit http://localhost:3000/ and witness a new React.js application in all of its glory!

You can open your application folder in an editor like Visual Studio Code and it will appear similar to this. 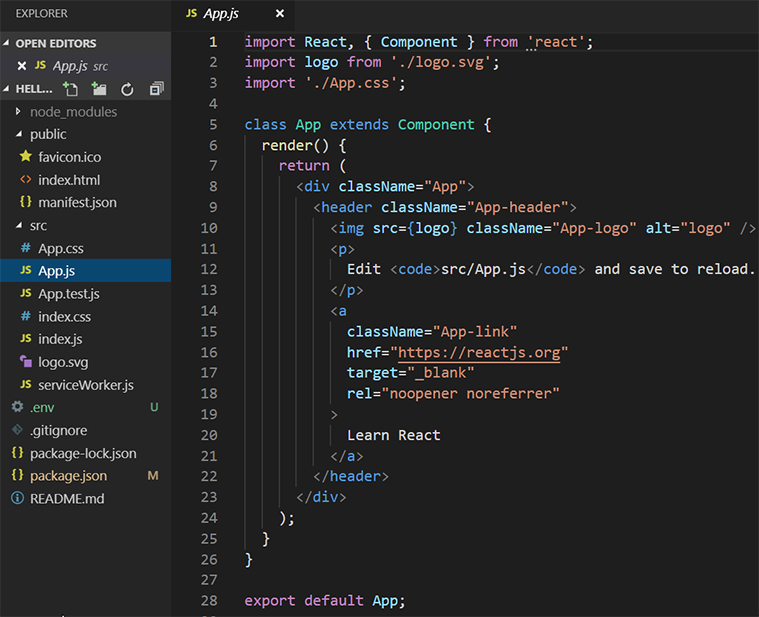 Now, to be sure we understand what’s going on here we can get rid of everything in App.js and replace with this code here.

This gives us a simple button that does nothing when we click it!

How To Use A React Hook

Now we are going to get a little more fancy with our button. We want to make use of some kind of state. Let’s update the code to this found here.

The code above makes use of a special function in React.js named useState. If you were to follow that link, you would see that this function is actually a State Hook in React.js. The useState function returns two items when called. The first item is a state object, and the second is a function to change that state object. The state object can be of any type such as a string, a number, or an array or something else. In this example it is a number. The state object has a name of counter while the name of its updater function is setCounter. In the code we are using JavaScript destructuring to capture these two variables in one line. The rest of the code pretty much shows us what is happening. When the button is clicked, the counter is incremented by one. We can see that here!

One Way Data Flow In React

In React data moves from component to component. Let’s see that in action here.

In this tutorial we started learning about the very basics of React.js, one of the most popular JavaScript libraries available today. A React application consists of reusable components, and those components are just like functions. That means they take input and then output a description of a user interface in the form of a React element. To render those elements in the browser we use ReactDOM. It then will re-render components any time there is a state change. To make this happen components we use a special React syntax called JSX. The input for a component is a set of properties which are accessed inside the component with its first argument object named props, as well as a set of state elements that a component can hook into with the special useState function. Any time a component changes its state, React automatically re-renders it.