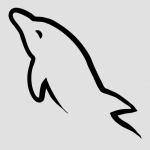 Also known as My Sequel, MySQL is the most popular open source database system in the world. As such this Relational Database Management System is the database of choice for a large number of open source web projects such as WordPress, Drupal, Joomla, phpBB, TYPO3, MODx, Google, Facebook, Twitter, Flickr, YouTube, and more. In fact, with just WordPress running 20 percent of the websites online today, you can bet that makes a huge impact in the amount of installations of the popular database software. It is also known as the M in the LAMP stack. L is for Linux, A is for Apache (though we like NGINX!), P is mostly referring to PHP. It could also however, refer to Perl or Python. In general however, when you hear fellow web designers and developers referring to the LAMP stack, most likely they are referring to the PHP programming language when thinking about the P. The popular database is named after the daughter of one of the co founders daughters. His name is Michael Widenius and his daughter is named My. The source code of the project is available to anyone, and is licensed under the GNU system. In the beginning, a Swedish company named MySQL AB was the sole owner of the database system. Today, it is Oracle that has bought the company and controls the software. High profile companies like Twitter, Facebook, YouTube, and Flickr have also been known to make use of MySQL in production environments.