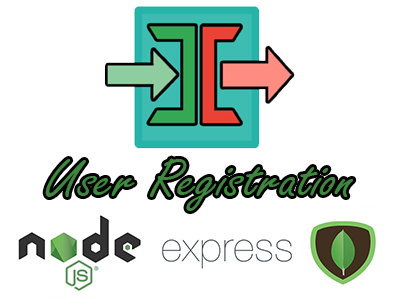 So we are going to start building the most basic of User Registration systems in Node.js using MongoDB as the data store, Express as the routing system, Joi as the validator, and of course Mongoose to make interacting with Mongo from Node easy. Below we have our sample project layout. User-Registration is the top level directory which holds the index.js file, and then we have a models directory and a routes directory. We’re going to see how to build the JavaScript files now to make this work.

First up we need to create a User Model. You can create a user.js file and place it in the modelsdirectory. At the top of the file, we require Joi and Mongoose as we will need them for validation and for creating the User Mongodb Schema. Then, we create the User Schema and define the requirements for name, email, and password. The User Schema is stored in User. Next up we create a validation function named validateUser. Lastly we export these modules so we can require them elsewhere.

Now that we have a User Model set up which both defines the schema we need to follow and the validation rules, we can create a users.js routes file in our routesdirectory. In this file, the first thing we do right at the top is to require, or import, the User schema and validate schema that we just exported in user.js. Next we make sure Express is initialized. The router.post() function does all the heavy lifting here. First the http post request gets validated, then we check to see if the user already exists in the database, and finally we create a new user if they do not exist in the database and also if they pass all validation requirements. Lastly we export the router, so we can use it in the index.js file.

Most of the boilerplate here should look familiar to you if you followed the rest api tutorial already. The key points for this tutorial here are highlighted. Note we require the users.js file at line 4. This allows us to set up the route for /api/users at line 13.

Now we can make use of Postman to send a Post request to our server to see if we can persist a new user to MongoDB. First, let’s launch the application.

Awesome, everything is running with no crashes! Now we can test some Post requests. Here we send a post request as application/json with a json object in the body of the request. We only set the user name, but we left off both email and password. We can see that our validation is working since the response we get back from the server is “email” is required. 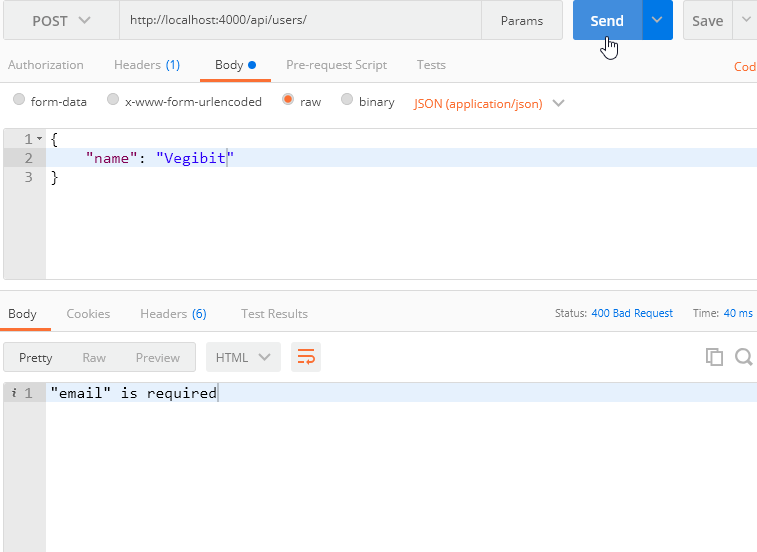 Let’s now fill out a proper user object to see if we can get the User to be stored in the MongoDB database. This time around, we don’t get an error back, but we see the user object. This means it was successful! 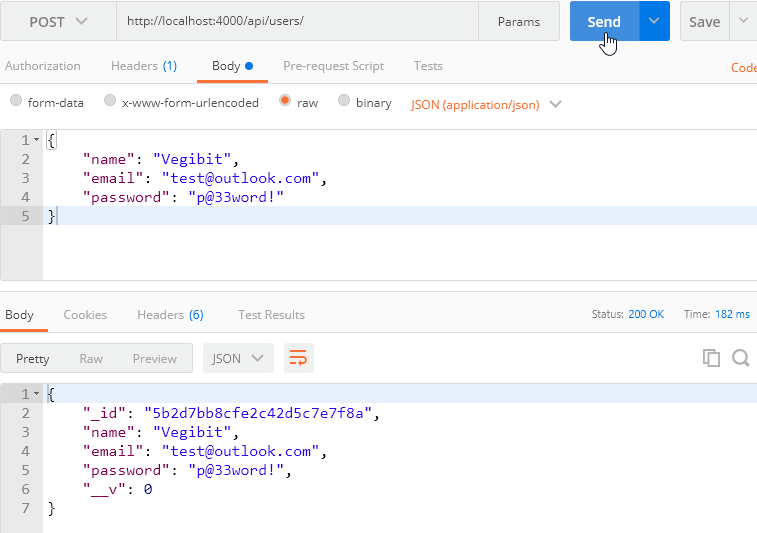 Now we can look inside MongoDB using Compass and see if this new user is in place. Nice!

Recall that we did put some logic in the code to make sure that if there was already a user in the database, then we should not persist that user again. To test this we send that same request again to the server, and we get back the response we expect. We are not allowed to insert the same user twice. Very nice! 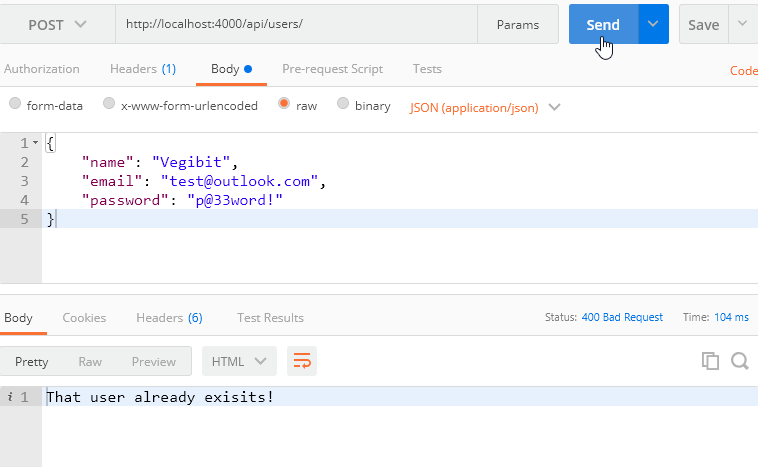 The rudimentary portion of the user registration is now working however the password is in clear text. This is a big no no, so let’s see how to encrypt the password before saving into the database using the bcrypt package. First up, we install it.

Now that we have bcrypt installed, we can use it in the users.js routes file like so. At the top of the file, we now require the bcrypt package which makes it available to use further down in the file. At lines 24 and 25 we then generate a salt, and use it to hash the password before saving.

Now, let’s run the application and then test with Postman.

With that, we can open up Postman and send a POST request to http://localhost:4000/api/users/ with a new user specified as a JSON object in the body of the request. 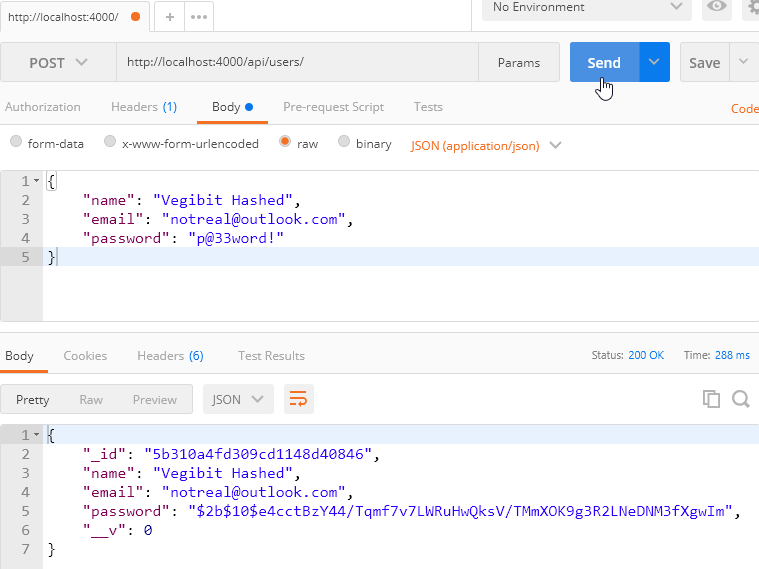 Excellent! We get back a response object which means a new user was created, and notice the password field: It is fully hashed. This way, the password is safe and secure in the Mongo database. In fact, let’s inspect it using Compass as well. Note the first user we had created has a password stored in plain text. The new user has a much more secure password which is properly hashed using bcrypt.

Using Lodash To Simplify Our Code

Let’s go ahead an import the lodash package into our project so we can make use of it. Lodash is a powerful JavaScript utility library similar to the popular Underscore Library. Here we go ahead and install Lodash.

Great! Now we can use lodash in our project. Specifically in this instance we are going to use the pick function which makes working with objects more terse. Now, once we import lodash into our file, we can make use of these handy one liners highlighted here.

How To Authenticate Users

Now that the user registration is in place, we can set up the process of authenticating users. First, go ahead and create an auth.js file in the routes directory. Once complete, we can start with this boilerplate.

Now we have to go back to the index.js file and set up the route for ‘api/auth’ like so.

Ok back to the auth.js file. In here we need to set up the logic that will authenticate a user when the credentials are provided during a log in attempt. That means we need to validate the HTTP request being sent, find the user in the database, then use bcrypt to compare the stored password against the password provided in the request. This code will accomplish those goals.

Excellent! Now let’s test the auth endpoint using Postman. We can provide a valid email and password and see what happens. 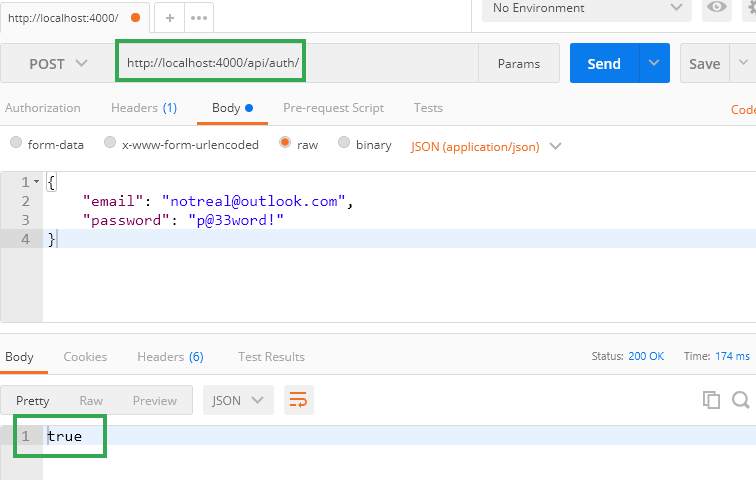 Now let’s send a request with the wrong password and see the result. Ah ha, looks good! It is catching the bad password therefore the user can not authenticate. 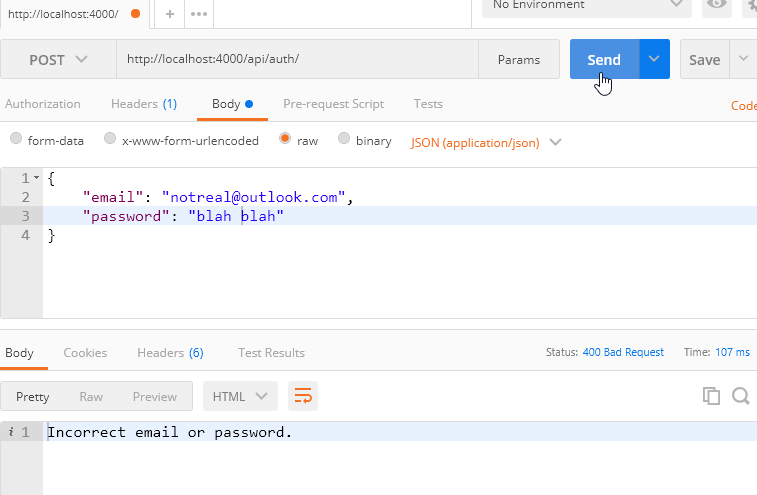 In the section above, we simply returned a true value when a successful login attempt was made. Now we are going to modify this response to send a JSON web token, which can uniquely identify any given user in the system. So in general the way it works is, the API generates a JSON Web Token upon successful login and then in the future that user must supply the JSON Web Token to identify themselves as a valid user when making various http requests to the api. On the client side, this token could be stored in local storage. That is beyond the scope of this tutorial as we will focus on the server-side here. Ok so to start generating JSON Web Tokens, we need to install an npm package to handle that for us.

Here we modify the auth.js file to make use of the jsonwebtoken package. We also use it to generate a new JSON Web Token, and send that back as a response to a proper http request.

Fantastic! Let’s test out sending a valid user name and email as a POST request to our /api/auth endpoint. We see that a valid JSON Web Token is returned back to us. 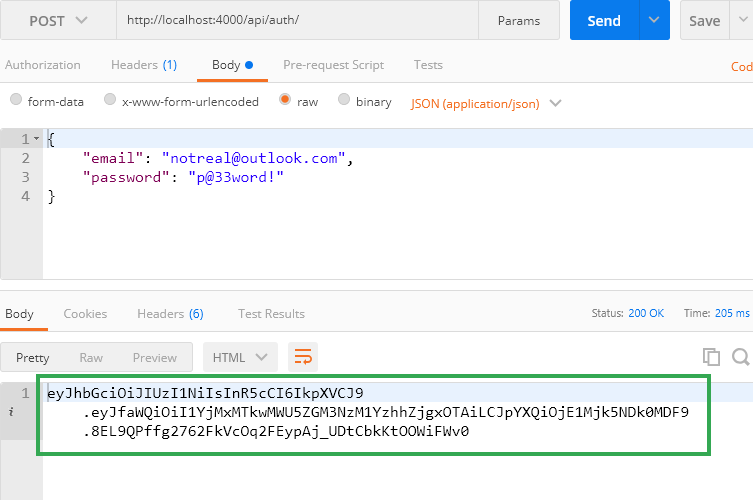 We shouldn’t really make the PrivateKey a part of the source code, it should be in an environment variable of some sort. Let’s do this now. First we can install the config package.

Once installed, we can require it in the auth.js file.

Now let’s make a config folder in our project and place a default.json file and a custom-environment-variables.json file in there.
default.json

Now instead of referencing the private key directly, we reference it using the config.get() function like we see here.

We should also include this in index.js like so.

Lastly, we need to set the key using something like this.

In the section above, we are successfully generating a JSON Web Token and sending it back to the client in the body of the response. Now we can make a few tweaks to send the token in the headers of the response which is a more common scenario. We can do this in the auth.js file for when a new user signs up.

Now let’s launch the application and create a new user from Postman.

In Postman when we send a request to create a new user and then inspect the response headers, we can see our generated JSON Web Token. 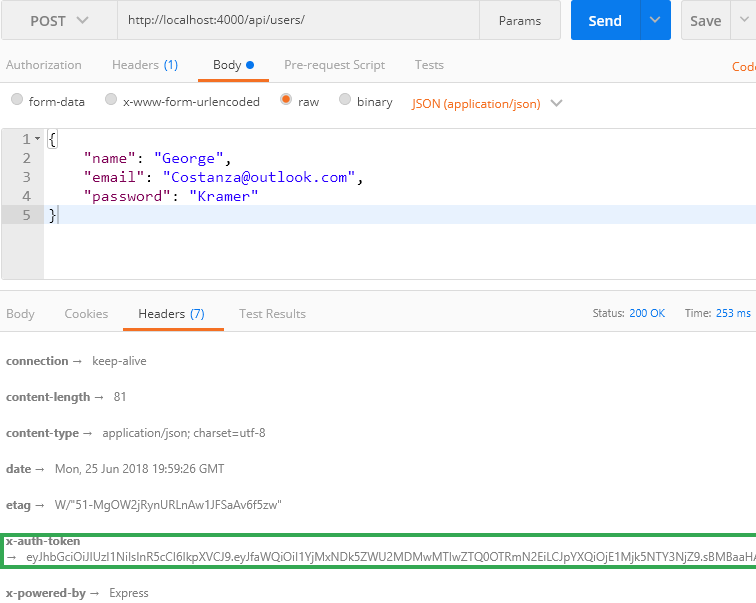 Now on the client side, this header can be read and stored for all subsequent API calls made to the server from the client.

In this tutorial we covered the very basics of setting up user registration and authorization for a REST API powered by Node.js, Express, and MongoDB. This is for learning purposes only, and not code that should power any application in the real world! Here is what we learned.