Skip to content
← What Are Some Common Programming Algorithms? | Python Recursion Examples → 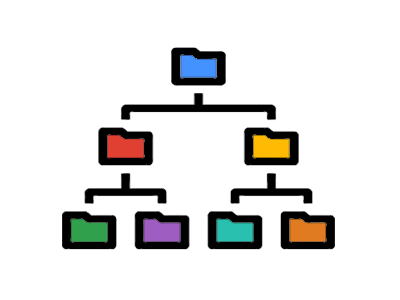 An array is a group of items where the position of each item is identified by an index or a key value. A one-dimensional array is the most basic type of array, and the diagram below shows what this might look like.

Element positions can be calculated using a mathematical expression which allows array elements to be accessed directly in a random access approach. What this means is that since the position of each element can be directly computed, there is no need to navigate or traverse the data structure in order to access an item. The first index element of an array is always at position 0. Here is an example of a simple one-dimensional array in Python.

Accessing every other element of the array

In Python, you’ll likely more commonly use the List data structure which is an array-like data type. Both the List and the Array in Python behave in similar ways in that you can iterate over them and store items at a specific index. The difference between the two is in the functions that you can perform on them. It is more work to use true arrays in Python because you have to import the array module and declare an array. Lists are simply a part of Python’s syntax, so they are used much more often and cover most of the use cases you’ll need. True arrays will be better for math functions as well as for working with large amounts of data. Most times, you can simply go with Lists. Here are a few examples of some lists in Python.

The linked list data structure is a linear collection of data elements that are often referred to as nodes. They are similar to arrays however each of the nodes has a field that points to the next element in the list, unlike an array. There are single linked lists and double linked lists. Here are a couple of diagrams that display this.

In a double linked list, each data item has a reference to both the previous and next items.

The stack data structure is a collection of elements that has two basic operations, push and pop. Stacks are LIFO, or last-in-first-out, data structures. The last item pushed onto a stack is the first one popped. An example of a stack is when you’re using the back button in your browser. As you surf the internet, the browser adds each link to a stack in order to maintain the order in which they were visited. When you click on the back button, the most recently added URL is popped off the stack and then revisited.

You can get the characteristics of working with a stack data structure in Python by making use of a list.

Push (Append) Items on to the stack

Print out the stack

Pop an item off the stack

Stack as a Class

You might also do something like the following which uses a user-defined class to offer stack functionality. This is still just a wrapper around using the list type, but now you have an actual push() method you can use.

The queue data structure also supports adding and removing items, but it uses the FIFO method. FIFO is a first-in, first-out approach. An empty queue that gets an item added to it, would be the first item in the list. Queuing in more items simply grows the length of the list. Queues are very common in programming since they mimick so much of what happens in real life. Have you ever been to the department of motor vehicles? Then you know very well what a Queue is. You walk up to the end of the line(queue), wait for some large amount of time(queue processing), and then finally get service once all others in front of you have been served. In Software, message processing is a common use of a queue.

Add some items to the queue

Print out the queue

Pop item off the queue

A hash table is basically an associative array. Many other programming languages have associative arrays, and Python has its implementation of this data structure via dictionaries. This data structure maps keys to values, using a hash function. A hash function uses the key to calculate an index for the slots and maps the key to a value. The ability to uniquely map a given key to a specific value is a big benefit of hash tables. This makes working with counters and filters fast and easy. Hash tables are also quite fast, making them good for large datasets. Hash tables don’t order their items in any specific way, so you would need to add a sorting mechanism if this is required.

Replace an item in a hash table

Iterate over the hash table to print key-value pairs

← What Are Some Common Programming Algorithms? | Python Recursion Examples →