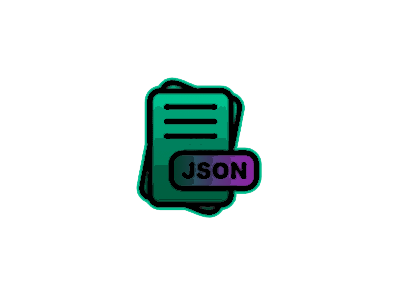 Working with data is the whole point of using Python as a programming language. JSON is perhaps the most common data format, and we’ll take a look at working with JSON using Python now. Python can handle processing JSON from a collection of possible data sources like files, Web APIs, or third party modules that output JSON. Python has a built-in module for JSON processing which is part of the Python standard library.

Parsing JSON into Python is pretty much the opposite of the serialization steps noted above. The one exception for that is dealing with lists and tuples. The reason for this is because lists and tuples in Python are encoded to arrays in JSON. This means when you parse the list back into Python, there’s no way to tell whether it was a list or a tuple originally. You could take a Python object, serialize it to JSON, parse it back into Python, and have a different object than you started with. The takeaway is that when parsing JSON into Python, you’ll never end up with a tuple in the Python object, it will always be a list.

Here is some Python code to show using the json.loads() method. To use loads() you first need to import json into the Python file which is pretty easy. All you need to do is type import json right at the start of the file. In the code is a variable named jsonstring, that has a JSON formatted string assigned to it. This data structure represents a fictional order at your favorite Mexican Burrito dealer. This allows us to read that JSON data using json.loads(jsonstring) storing the result into the data variable. The variable jsonstringis of type <class ‘str’> before using the loads() function. Thre resulting type stored in data is of type <class ‘dict’>. Once we have the data in a Python dictionary, you can see how it is very easy to loop over the contents.

Now we can easily serialize a Python object into a JSON representation. In the code below is a pythondict variable that holds all the information about our Burrito order. This Python dictionary can be converted to a JSON string using the json.dumps() function. We pass the function the data to convert as the first argument, and the number of indent spaces to use as a named second argument. The result of that operation is stored in the jsonstring variable. When we print that variable out, we see a nice JSON string as output. So now we see how to both parse and serialize JSON data using Python.

It is possible to encounter errors when parsing and serializing JSON in Python. To handle these situations we can use the JSONDecodeError class that is part of the JSON module itself. Let’s revisit one of the examples so far and wrap the JSON parsing in a try/except block. We use JSONDecodeError to emit custom error messages if anything goes wrong. The code is highlighted where there is a missing comma and the results from running the code show that this error was caught and handled.

Now we have a different error in the JSON.

Working With JSON from an API

We can once again use the familiar httpbin.org site to test out using the Requests Library along with some JSON parsing and serialization. The pattern of retrieving JSON text and parsing it into a native dictionary is common in Python and the Requests library will automatically detect if the returned content from a request is JSON and will parse it for you. In the code below, you can see that we use requests.get(url) to make a GET request to http://httpbin.org/json. That endpoint offers this output. 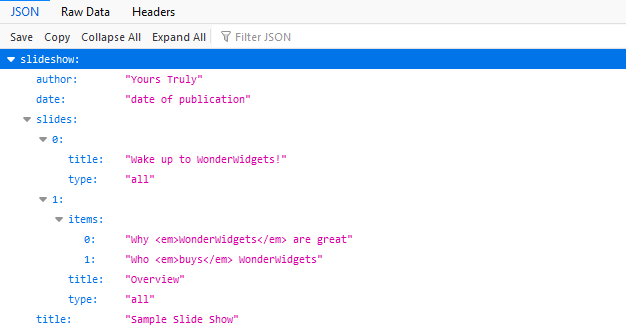 The .json() function is a convenience function allowing the developer to quickly access JSON data.

Learn More About JSON in Python

In this tutorial, we learned how to work with JSON in Python. Some of the key points are summarized here.