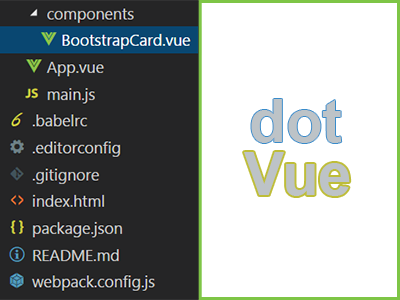 Now that we have our vue cli build environment set up and working nicely, let’s try building some components! We’ll go through the process of getting App.vue set up as the main file which will simply make use of components to display things. We can begin by just rendering some html from the main App.vue file, then we will export that markup to it’s own component. From there, we’ll see how to make use of that component. Once we have the most basic component working, we’ll add some behavior to that component. Lastly, we’ll see how to render more than one of the single file components to demonstrate it’s re-usability and the fact that each instance of the component has it’s own data which can be updated independently from any other of that rendered component.

The index.html file which loads the entire application will use this markup below. It’s super simple, we just import Bootstrap to make things look pretty, set a div with the #app id, and load the build.js file which get’s created upon running an npm run build command.

Render HTML From The Template

We can start by adding some very simple html markup to the App.vue file to demonstrate how Vue will render markup. At this point we’ll have no dynamic data or behavior, just static html.
App.vue

Now we can visit the command prompt and run npm run dev to build the source.

Voila! We have some html rendered via Vue in our browser.

Now, we can extract this markup to it’s own component. Let’s see how to do that. First off, let’s create a new file paying attention to the naming convention of the file. We will use Uppercase for each word of the file name with no spaces or hyphens. We’ll also add a components folder to hold the new component.

Components Must Have One Root Element

With the new BootstrapCard.vue file created, we can now begin populating the file with some markup. The first thing we need to be aware of is that in the <template> section of .vue file, there can be only one root element. What does that mean? In simple terms, it means you need a wrapping div around any markup you want Vue to render for you. Note the highlighted <div> here.
BootstrapCard.vue

This is great, but nothing works as of yet. Let’s continue.

Components Must Export An Object

In the <script> section of the component, you must export an object in JavaScript. This represents the Vue instance of this component.
BootstrapCard.vue

Now we can navigate back to the App.vue file and try to make use of the new component. How can we do that?

In order to use the new component you created in a different .vue file, you first need to import that component like so.
App.vue

Components Must Be Registered

Use The New Component

The last step, is to include the new html tag that represents the new component we created in the <template> section. But what is the tag we use? Well here is a little magic happening behind the scenes by Vue. Since we followed the convention of upper case of each word on the naming of the component, i.e., BootstrapCard, this automatically translates to a tag of <bootstrap-card>. In fact, we can see our IDE already recognizes the new component.
App.vue

The first section got us up and running with a static Vue component. Of course, we want to add some dynamic data and behavior to that component so that is what we will do in this second section. First off though, let’s just center the component in the page using Bootstrap 4’s new flexbox features.
App.vue

Important! In single file components, the data() function must actually be a function that returns an object rather than an object itself. Why? This is so that everytime you make use of the component elsewhere, it will have access to it’s own data – not a shared instanced of data. In other words, if you have four bootstrap cards on the page, each one will have it’s own data. It sounds simple, but this is a really important point.

Now, we want to bind that data to the markup in the <template> area of the component. Notice that the <h5> tag and the <p> tag no longer have any text between the tags. What we are doing is dynamically binding the data we just set up in the data() function, and now *that* will be what populates the tags. In the card title, we will be able to use text. In the card paragraph we can use text or html.
BootstrapCard.vue

Now the card is being rendered with dynamic data.

Now we want to actually add some behavior to the component. How about when we click the button, we change the title of the component? For this, we will set up a new setTitle() method in the methods object like we see here. What it will do when triggered is to take the new string and assign it to the thecardtitle property which will in turn update the UI in real time.
BootstrapCard.vue

Ah ha! With that update our component now has both dynamic data and dynamic behavior. Sweet!

Using v-for on a component

Remember we said that each instance of a component will have it’s own data? Let’s prove that. In the App.vue file, we can use the v-for directive to loop out 2 card components like so. This should now output two components to the browser and they should both work independently of each other. In other words, clicking one button will only effect that particular title on that particular component.

And yes, this is working as intended.

That pretty much sums it up for getting a super basic single file component set up in Vue. Below we’ll simply add one more method and click handler to also update the body of the card. We’ll use some html on the body since we used the v-html tag like we saw.

Included here is the actual built files which are rendering the component and providing the associated behavior.

To gain these benefits, you need a build development workflow. For that, the Vue Cli is your best friend! Learn more about this type of approach right at the Vue website.