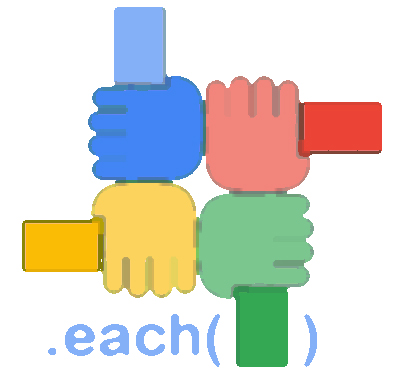 As we mentioned, the various collection functions in Underscore really help us to navigate our way around JavaScript objects and arrays in a really easy and straightforward way. In this particular tutorial we’ll have a look at the each function and how we can use it with arrays, objects, arrays with context, as well as objects with context. When we say with context, all we really mean is what the this keyword will be pointing to during particular portions of code execution. The each function is really one of those bread and butter type functions that you just have to know, so let’s dig in now and get better at working with each in Underscore.

First off, we’ll have a look at working with a simple array with the each function. In this first example we have a simply array of cars. Let’s see if we can iterate over each car in the cars array to do something interesting. The way we do this is to call the each function and pass in the cars array as the first parameter. The second parameter to the each call is our iterator function. This function gets executed on each loop through the array, on each element of the array. When you go ahead and click the button to run the code, we can see four lines of output corresponding to each item in the cars array. In looking at the iterator function signature, we have an element (refers to an element in the array), an index (the numerical index of each element), and the list argument which references the original data.

.each() with an Object

This example will focus on seeing how each works when dealing with a JavaScript object. Now have a look at that sampleobject and notice is has a FirstKey of One and SecondKey of Two. With our sampleobject set up, we then make a call to the each function, and you guessed it – pass that sampleobject right in there as the first argument. So what do you want to do with that sampleobject? Well, that is where our handy iterator function comes in to play (The anonymous function passed in as the second argument). In this example, our iterator has a signature of value and key. As such, we have access to those values within the iterator and we make use of them to print out some useful information about the object.

_.each() and Arrays With Context

Next up we’ll have a look at working with each and arrays but setting the context as well. Go ahead and click the button to run the code and notice the output of

Finally, we can take a look at setting context with each when you’re dealing with an Object. If you give the code a run, you’ll see this output.

All great reason to go out and pick yourself up a nice Tesla. So this example makes use of two objects. The first object is the features object, and that holds all of the features of a cool car. The salesperson object contains functions such as getPitch and sellCar. In the call to each, we iterate over the features object, then again set up an iterator function as the second argument. We don’t finish there however, as we also pass in salesperson as the context to the each function. Therefore when we make a call to this.sellCar in the iterator, it knows to go look for that function inside the salesperson object since this is what was passed as the context.

In this tutorial, we had a close look at working with each() in the underscore library. The four examples were definitely helpful in better understanding how each works with arrays and objects. We also came up to speed with setting the context properly when dealing with both arrays and objects.