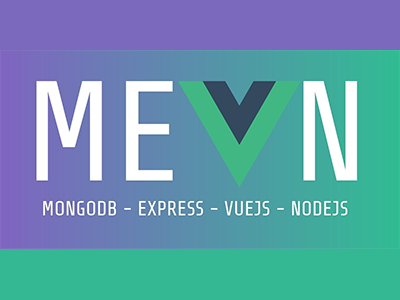 In this tutorial we are going to build a small project using the MEVN stack. MEVN is the acronym for MongoDB, Express, VueJS, and Node.js as the full stack application. MongoDB is our data storage mechanism, Express is the middleware to handle HTTP requests and routing, VueJS is the client side JavaScript to render data, and Node.js is the server our application will run on. As an added bonus, we’ll include a cool Bootswatch theme to make the CSS look good. Let’s get started.

To get started, we’ll add a new directory to hold our server code and run an npm init -y to initialize a package.json file for us.

Add Dependencies to the project

Let’s add an index.js file to our project as this will be the entry point into the application. 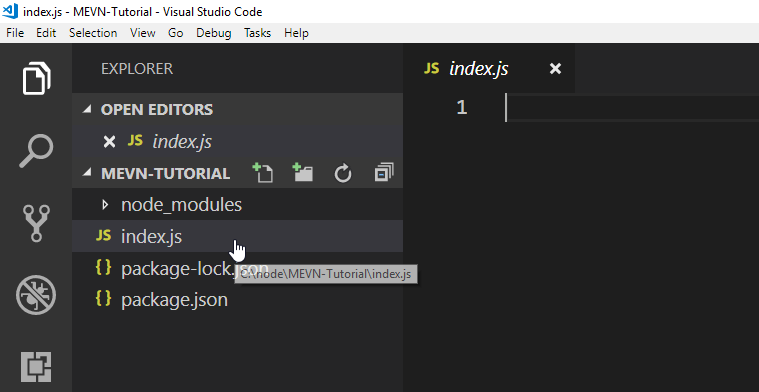 Test Out Our Server

We have everything in place to test out our server. We just need to add a little bit of code to make it work.
index.js

If we load up http://localhost:4000/ in our browser, we can see the server is working. Great!

We’re going to be using Vue.js on the client side, so let’s go ahead and start setting that up now. First we’ll install the Vue Cli.

Once that is complete, let’s run the vue create client command and choosing the Router and Linter / Formatter options. 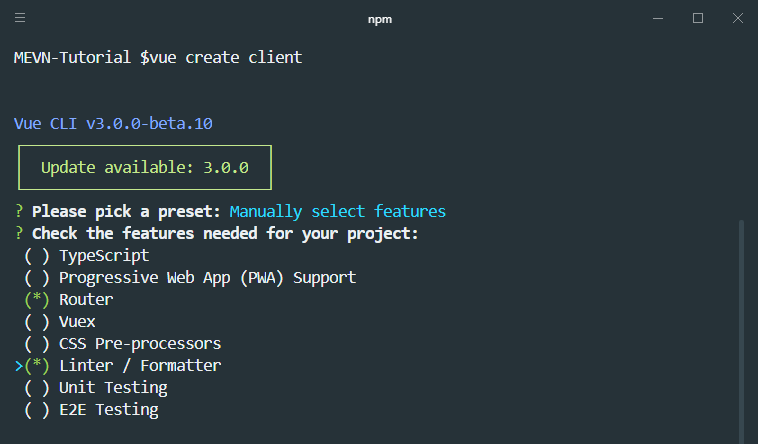 When you finish going through all of the prompts, you should see something like the following. Basically, we are now building the front end to our back end api within the client folder using Vue cli.

Wow! Pretty cool that Vue cli is! Ok, we since it says we can run those two commands, we will do that and then visit http://localhost:8080/#/ to see our Vue installation running. 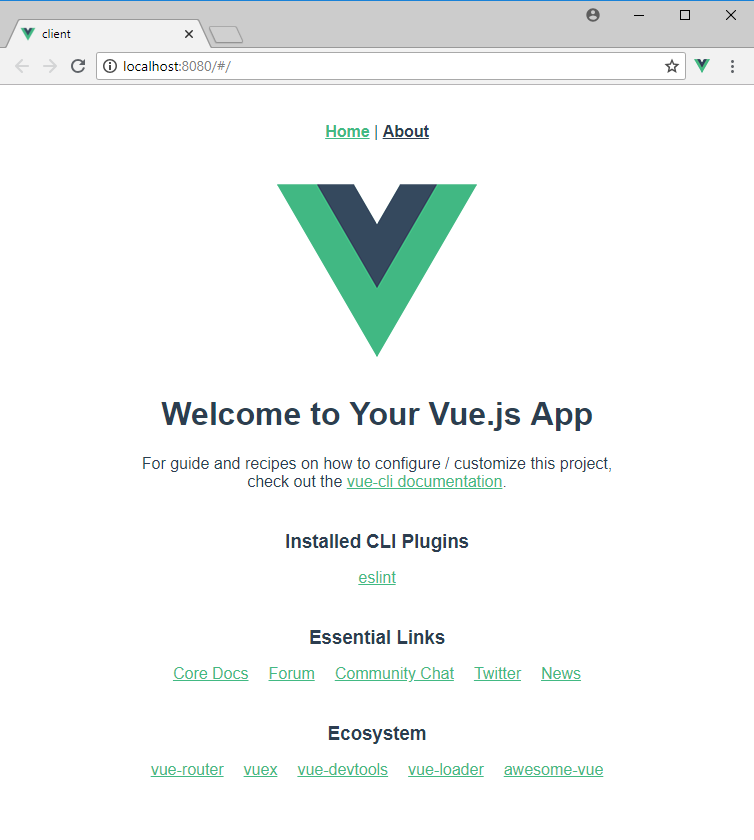 Now just to change things up, we’ll include the CSS for the Bootswatch Sketchy theme by adding it to index.html like we see here.

Now when we look at our front end, check out the cool effect! 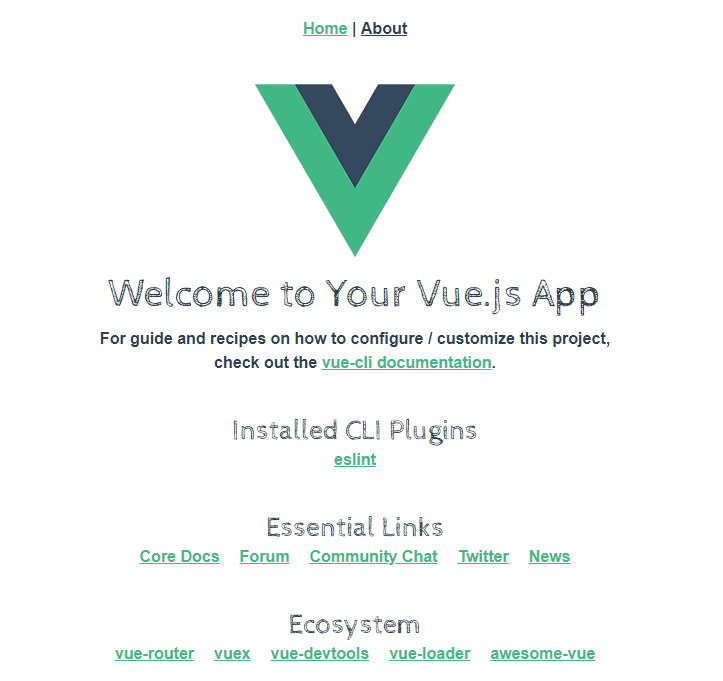 Excellent. We now have a front end that will consume the API which we are still building. In fact, let’s shift back to the back-end code and continue building out what is needed.

Connecting To MongoDB With Monk

In a different tutorial we used Mongoose to connect to our MongoDB server. In this episode, we’ll make use of Monk, which is a lighter package for quick use. So let’s install Monk now and while we are at it, we can install Joi as well for some simple data validation.

Right then. We are ready to create a model to store messages that a user might submit to our api. In our project, we can add a db directory and then place connection.js and messages.js files in there.

connection.js
In the connection.js file, we can add this code which will allow us to connect to MongoDB.

messages.js
This is the model for working with messages.

Add a route to get messages from Mongodb

In index.js, we can add this code.

We can even test this now. In a command prompt, we can run mongod to kick off our Mongo server. Then, we will need to run node index.js to launch our project. At that point, if we visit http://localhost:4000/messages, we are getting back an empty array. This is good actually, because it means that we are talking to the Mongo database, we just don’t have any messages in there quite yet.

Add a route to create a message

In index.js, let’s add a route to handle a POST request to the API which will add a new message to the database.

What we can do now is to send a POST request to the API using Postman. 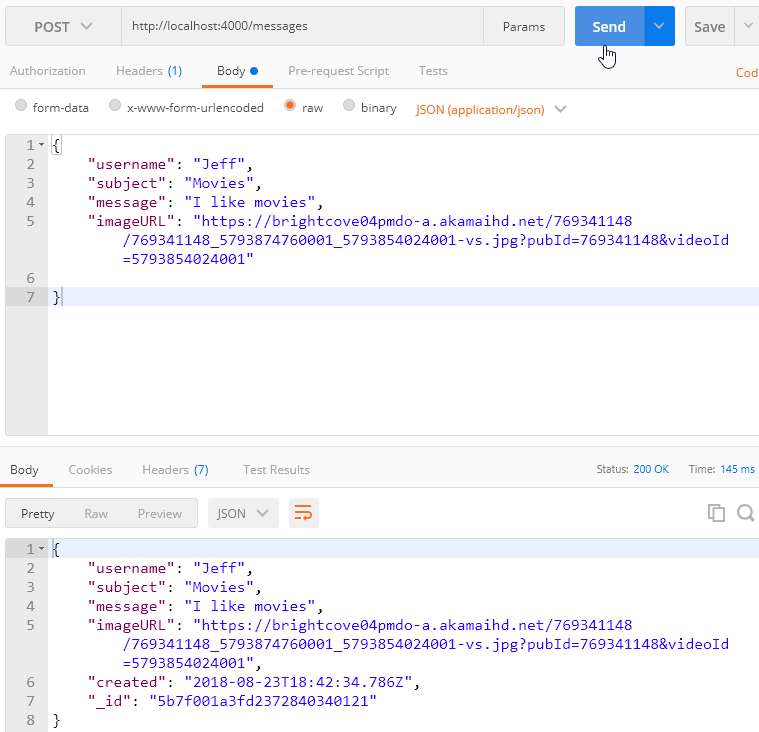 Now let’s use Compass to see if the data is in the database. Looks good!

In addition, if we visit http://localhost:4000/messages, we now see the message which is stored in the database returned in JSON format.

Our API is now working. It is able to accept and return messages in JSON format. Now we want to render one or more messages on the screen using our Vue Client. We can start by adding the following Vue code to Home.vue.

To test this now we actually need to node instances running. In the MEVN-Tutorial directory we must run node index.js to fire up our API server. Then, we must also launch our client by opening a *different* command prompt and running npm run serve from the client directory. Hopefully that makes sense! Once that is complete we will have two instances running.

Ok, with both of these running, and our Home.vue file populated with some Vue markup – we can see that our data is being rendered on the page. Slick! 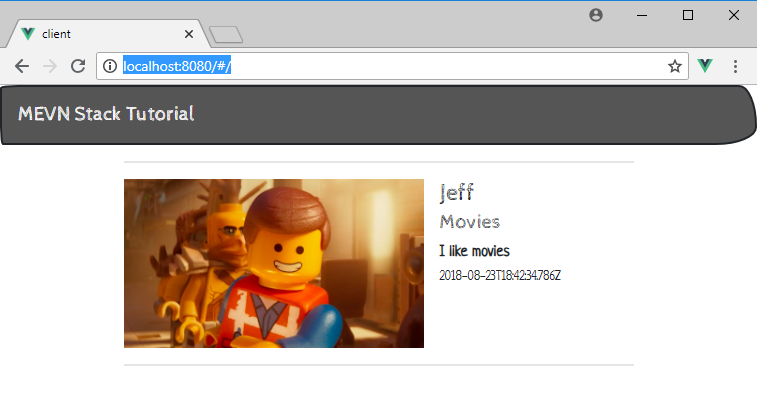 This is pretty cool. Our browser is making a GET request to an Express server, which then in turn responds with JSON data from a MongoDB database. At that point, our Vue.js code consumes that JSON data, and renders it out onto the page. Excellent!

Now we can add this code to Home.vue so that we have a form to add a new message.

Let’s go ahead and manually fill out the form with some new data for a message and test it out. 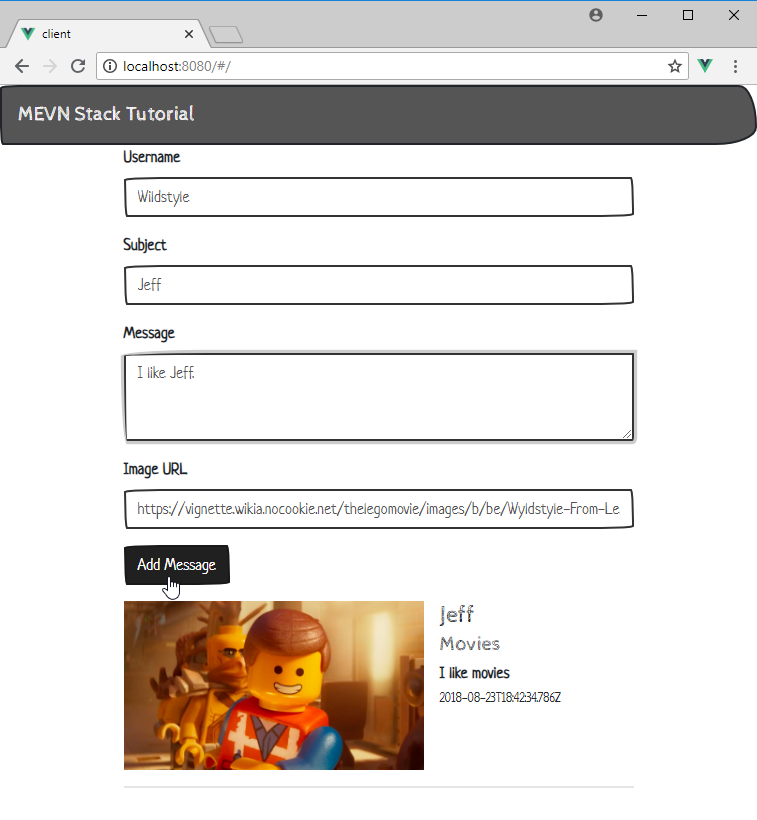 Once we click on submit, the POST request is sent to our API – along with the data we entered into the form. Now we see the new message on the page. Great! 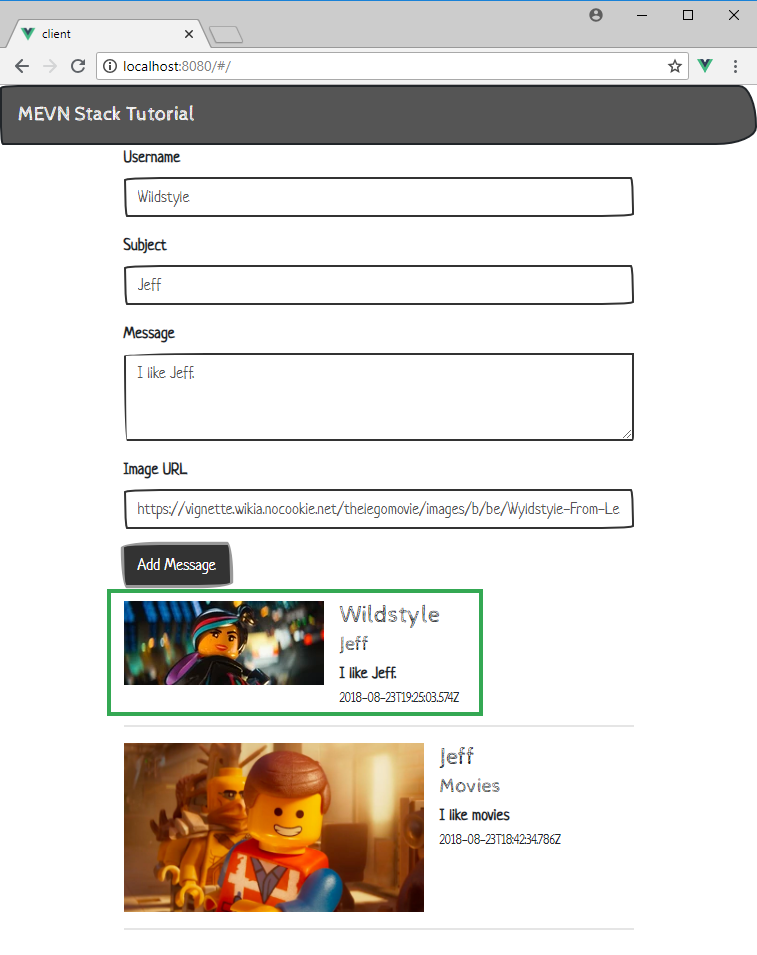 Let’s add one more message to make sure things are working. 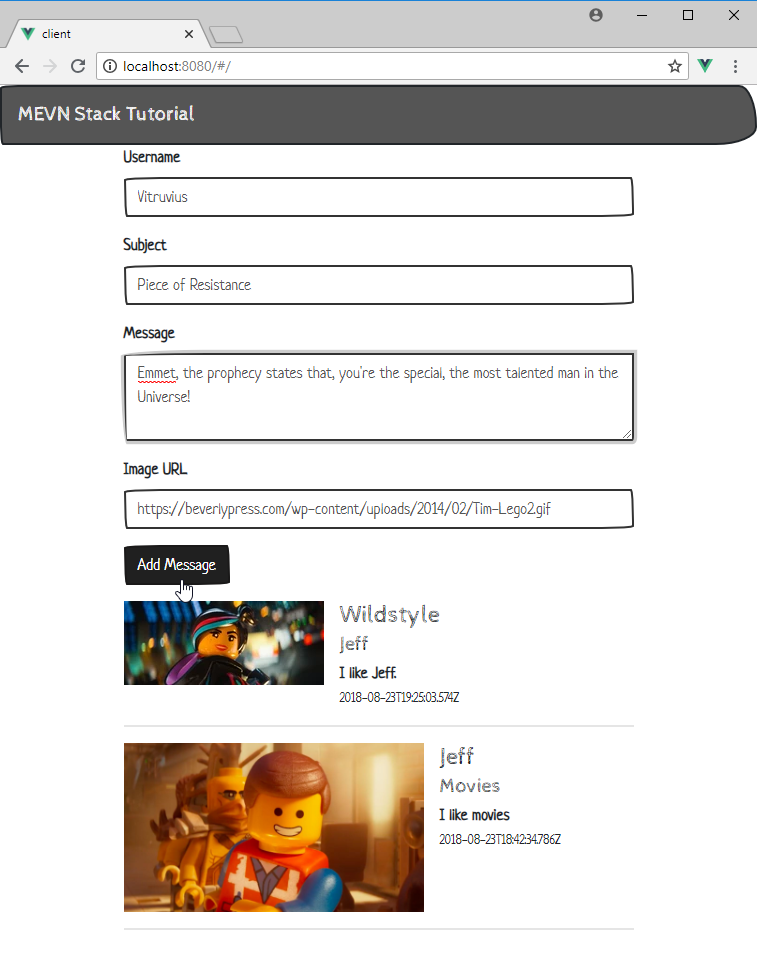 Once again, we see the new message on the page along with the first two we had added prior. 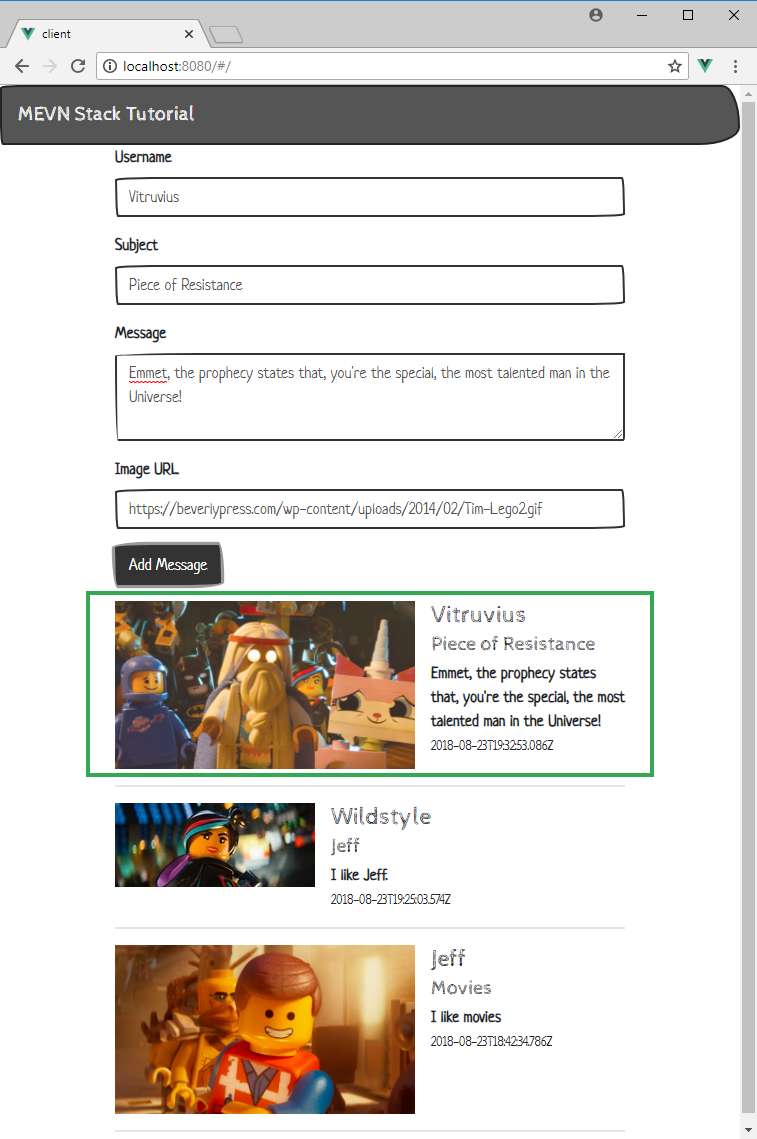 That concludes this tutorial which explored the basics of working with the MEVN stack. Of course you likely have heard of the MEAN stack which makes use of Mongo, Express, Angular, and Node. This approach removes Angular from the Stack and inserts Vue.js in it’s place. Interestingly, this was one of the first tutorials where the client side does nothing more than simply interact with an API. Express, Mongo, and Node worked together to provide the API while Vue.js provided the client side application that sends and receives JSON data with that API. Excellent!