Angular by Google and React by Facebook are two of the most popular JavaScript Frameworks as of today. Vue.js is what we’ll cover in this Vue.js tutorial, so let’s take a slight turn and look at what this fantastic MVVM framework called Vue.js has to offer. Vue.js makes building interactive web interfaces easier via two way data bindings. Simplicity is a goal of Vue.js, especially as compared to some of the other popular JS offerings. Let’s have a look at Vue.js now.

Try out the Todo app demo

Installing Vue.js for the first time.

The best way to learn something is to simple start getting your hands dirty right away. That’s what we’ll do with Vue.js right now. In order to create a code sandbox for us to work with, we’ll create this simple application directory like so.

With this configuration we have access to all of the features of Vue.js via a content delivery network, as well as some css styling via the bootstrap framework, also from a CDN. This way, it is simple to build out our code playground in about 10 seconds.

Moving right along, we can set up our first two way data binding instance with Vue.js. We’ll add a container with an id, then implement a new Vue instance and bind it to the element we just created.

Element to bind to

Result in the browser

Think of the placeholder in between the mustache curly braces (in this case hello) as a variable that simply grabs the data that is in the property of the same name of the data object in the Vue instance. I know, sounds a little tricky, but it does make sense. Let’s demonstrate the two way data binding further with an input element.

Result in the browser

Anything that gets typed into the input is immediately updated in the dom. Very cool.

The Language of Vue.js

Before we go too much further, it would help to review some of the constructs of the language itself. Vue.js works by applying various attributes to your raw HTML so that your JavaScript and Vue instances can easily interact with those elements in the dom. Here are some of the v-* constructs, which are referred to as directives, to be aware of.

This will add an event listener for the submit action on a form.

The v-model directive is used to create a two way binding to a form input element. It can be used on <textarea>, <select>, and <input> tags as needed.
An example in a Todo app might be like so.

The v-el directive registers a reference to a dom element to the corresponding Vue instance. We can see a use case in the prior snippet where we demonstrate the v-model.

The v-show directive is used to set off transitions. In other words, if you take action on an element in the dom which interacts with a Vue instance, a different portion of the dom can be updated in real time. For the Todo app, we can show items we finish with something like this.

v-for is often used to display a list. It is populated by an array of objects in the ViewModel. Each object in the array gets a child Vue instance created. In the snippet above, you can see how by combining v-show with v-for, we can output lists of items in real time.

The Structure of a Vue.js App

If you were to stub out a Todo application with Vue.js, it may look a bit like this.

Now that we have Vue.js installed and we have investigated some of the basic concepts of how it works, let’s build a simple Todo application which runs as a single page application in the browser.

Our fist goal is to be able to display a form on the page with a submit button. When we type some data into the form, then click submit, it should then update in real time on the same webpage with no reloading of the browser. Here is how we can do that with Vue.js. 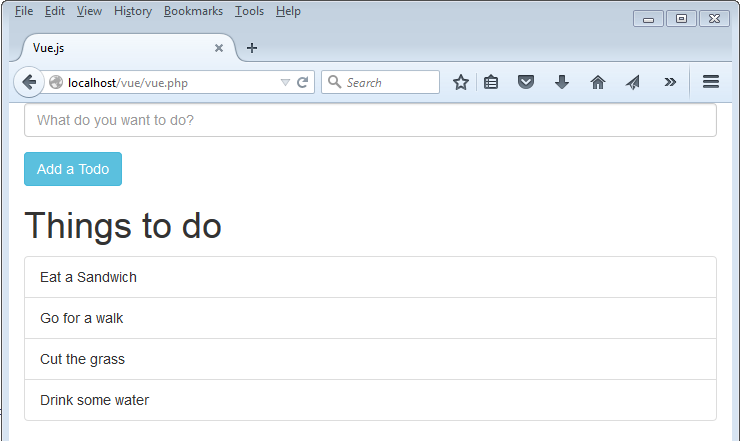 Now that we can successfully add items to our Todo list, let’s now implement a way to delete the items from the list with the click of a button. First off, we need to add some type of visual indicator to our HTML to show the intent to delete an item. Recall, that we use the v-repeat directive to loop over all of the todo items. All we have to do is add a button like so.

We go get a drink of water, click the delete button, and voila – it is gone. 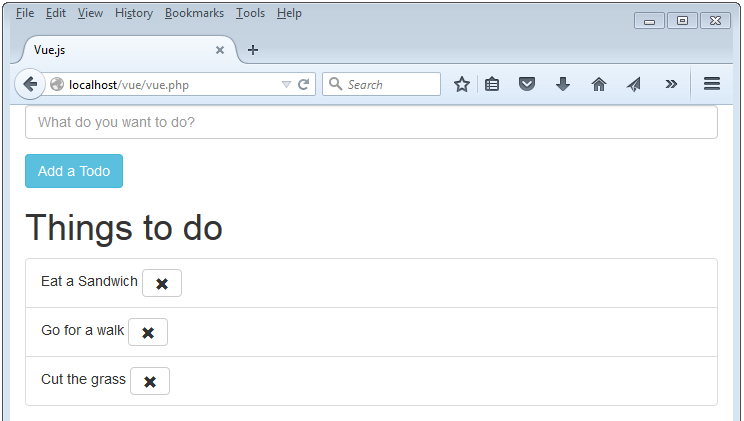 Edit a Todo in 3 Lines of code

Now let’s add the ability to edit an item. All we have to do is add a new button with an edit symbol attached, associate that to an on click event that will fire an editTodo method, and provide a name to the element that we want to give focus to.

Add v-el=”newTo” to the input

Change the time at which we want to eat a sandwich.

Mark A Todo Item as Complete

So far we can add a Todo item as well as edit or delete a Todo item from our list. Let’s add a simple way to mark a todo item as completed. In order to keep track of items that are complete, we need to make use of a new topic we have not covered yet, and that is filtering. We actually need two different areas now to show items, one where items are pending, and one where items are already finished. First let’s update the HTML to support these two different categories.

In the snippet above, you can see that we are referencing a pending and finished property in our code. Let’s see what this corresponds to in the JavaScript side.

The definition of filters from the documentation.

A Vue.js filter is essentially a function that takes a value, processes it, and then returns the processed value. In the markup it is denoted by a single pipe (|) and can be followed by one or more arguments.

We also make use of the computed object, and this is defined as follows.

Vue.js’ inline expressions are very convenient, but the best use cases for them are simple boolean operations or string concatenations. For more complicated logic, you should use computed properties.

This function will mark a pending item as finished, and our filters will move the todo item from the pending list to the finished list in the corresponding HTML.

The corresponding HTML these functions act on are here.

Vue.js is a great JavaScript framework that is fun to use, and quite flexible. In this tutorial, we had a look at some of the basics of how to use it, and you can even try the little app at the top of this post. Vue.js is one framework to keep your eye on.