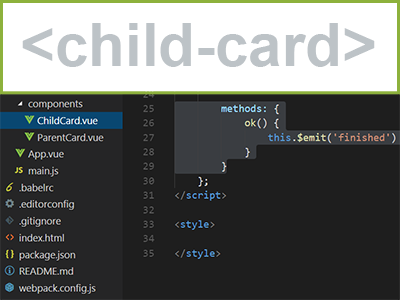 Parent To Child Communication In Vue

In order to pass the data down from the Parent Component to the Child Component, we can now visit the parent component and set up an attribute binding which uses the same name as the prop from the child component. Note that we are inside the parent component, but we are rendering a child component using it’s custom tag of <child-card>. It is on this tag where we set up the bound attribute. Now, since we are using parentmessage as the attribute name, then in the Child we will need props: ['parentmessage'] as a prop. In our Parent we pass the data down using <child-card :parentmessage="parentmessage"></child-card>.

So in this snippet below we have a Child component which has a prop setup and a string value of parentmessage in it’s array. What this indicates is that parentmessage can be set from the outside, or from the parent component. That is exactly what we are doing in the section above. The string name given for the prop, in our case parentmessage must match the property name used in the template section of this component.
ChildCard.vue

So let’s see this little bit of code in action. Below we have the rendered ParentCard.vue parent component, and a nested ChildCard.vue child component. In the child, we are using a v-if to conditionally display an alert with a message from the parent. If there is no message, then we do not display the alert. So when the page first renders, the initial value of parentmessage is just an empty string. We can see this in the data() method of the Parent Component. That is why at first, the Child component does not display any alert message. However, if the user clicks the “Send Child A Message” button in the Parent component, then a sendMessage() function triggers. This sets the parentmessage variable to “<b>Message From Parent:</b> Do Your Homework”. Since this variable is bound to the child using :parentmessage="parentmessage", and the child component is accepting that value via props: [“parentmessage”], then the child component updates with the alert message of “Message From Parent: Do Your Homework”. Pretty cool!

Child To Parent Communication In Vue

The Child Emits a Custom Event

First off in the <template> section of the child component, we will add a click handler of @click=”ok” like so.
ChildCard.vue

What this says is that when we click the Ok button, we want to run a method named ok(). Let’s set up that method to emit a custom event when it triggers. We pass a string of ‘finished’ to the $emit function. We can choose any name we like, but this makes sense in our case. We want to send a message from the child back to the parent that we are finished.

The Parent Listens For The Custom Event

Now we can move back up to the Parent component and where we make use of the <child-card> custom tag, we can now attach an event listener for our custom event using @finished=”finished”. This means we are going to want to run a finished() function inside the Parent component. Both the custom listener and the function it triggers are highlighted here.

In this demo you first click the “Send Child A Message” button. That sends the message down to the child component, and it renders the message along with a new button. Now, we can click the “Ok” button, and it emits that custom ‘finished’ event. In the Parent, we were listening for that custom event and on hearing it we trigger the finished() function to set the parentmessage back to an empty string. Finally, everything re renders and we are back to the starting point. Now we have the Parent sending messages to the Child and the Child responding as well as the Child sending messages to the Parent and the Parent responding. Cool!

There is another way to send a message back to the parent from the child if you don’t want to emit a custom event. What you could do is instead of defining the ok() method on the child, you can define it on the parent. Once it is defined on the parent, you can pass another prop from the parent to the child. So what we have here in the ParentCard.vue file is the ok() method defined and highlighted, and the binding on the <child-card> defined and highlighted.
ParentCard.vue

Now we need to update our props on the child component. What this does is enable the passing of a callback function from the parent to the child via props. We can set that up like so.
ChildCard.vue

We learned a little bit about how VueJs Parent Child Communication happens in an application during our VueJS Form Component tutorial. In this tutorial, we simplified things by removing the Laravel backend and focusing specifically on a purely Vue environment where we studied how props are used to send information from a Parent to a Child, and how custom events are usually used to communicate from a Child to a Parent in VueJS.